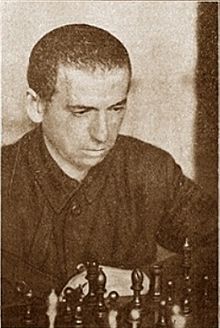 Boris Verlinsky during the 6th Chess Championship of USSR in 1929

Boris Markovich Verlinsky (8 January 1888 in Bakhmut, Ukraine - 30 October 1950 in Moscow, Soviet Union) was a Ukrainian-Russian International Master of chess. He was one of the top Soviet players of the 1920s. Verlinsky was deaf as a result of Meningitis as a youngster.

In November-December 1925, he tied for 12th-14th in Moscow (1st Moscow International Tournament) - the winner was Bogoljubow. But in this event, Verlinsky scored many beautiful wins over strong players, with perhaps the most impressive being his victory over World Champion José Raúl Capablanca with the Black pieces in a dazzling tactical display. In 1926, Verlinsky tied for 1st with Marsky in Odessa (3rd Ukraine Championship). In 1926, he tied for 8th-9th in Moscow (7th Moscow Championship) - Abram Rabinovich won. In 1928, he won the 9th Moscow City Championship.

In 1929, Boris Verlinsky won the 6th Soviet Championship in Odessa, at the time earning the title of Grandmaster. The title was removed in 1931. It has been argued that this in order to make Mikhail Botvinnik the first Soviet GM.

According to the site chessmetrics.com, Verlinsky was rated at 2627 in May 1926, and this placed him 16th in the world at that time. Chessmetrics provides historical ratings for players and events throughout chess history. Official ratings were introduced by FIDE only in 1970.

Verlinsky was less active at chess in his later life, but could still provide a competitive test for strong masters. After many years away from top competition, he attempted to qualify for the Soviet Championship final in 1945, at age 53, but could only manage 4.5/15 in the semi-final, and did not advance. But he defeated rising star Bronstein in this event. Verlinsky's last major competitive event was the 1945 Moscow Championship, where he scored 5/16.

Verlinsky was awarded the International Master title in 1950, the same year he died at age 62.

Verlinsky was exceptionally strong in the classical openings with both colours. At his peak, he was a formidable tactician who could provide a stiff battle for the very best players, as his wins over Alexander Alekhine, José Raúl Capablanca, Efim Bogolyubov, Grigory Levenfish, Akiba Rubinstein, Rudolf Spielmann, and David Bronstein, among others, attest. His physical disability of being a deaf mute, and success at overcoming this in chess, is impressive. He was Jewish. Verlinsky never got a chance to compete outside the Russian Empire or the Soviet Union.