The Spoils is a collectible card game created by Tenacious Games and owned by Arcane Tinmen since January 2009. It launched with a free open beta in August 2006, and officially released for sale in November 2006. The Spoils was in development from 2001 to 2006. The design team is headed up by Josh Lytle, who also designed the collectible card game Magi-Nation Duel. Jon Finkel, a prominent player in Magic: the Gathering's Pro Tour, aided the development team as an advisor since 2002. The Spoils Card Game, while under the design direction of Ken Pilcher, won the Fan Favorite Origins Award for Best Collectible Card Game at the 2015 Origins Game Fair, beating other contenders including Legend of the Five Rings and Magic: The Gathering.

The Spoils uses a number of mechanics in common with other collectible card games. Unlike many games of this kind, you start the game with a Faction card in play, which determines how you begin your turn and which actions you are allowed to take. These Factions have special abilities, unique to each Faction card. Currently, 6 Faction cards are available to the public. Special foiled versions of this card were given away at Gen Con.

Players need to amass Resource cards in order to play other cards. Certain cards are "Staple" Resources and any number of these may be played in a deck. As of the Seed Cycle, there is a rare Resource for each trade. The Factions count as Staples as well, according to the bottom of the card. However, since these are set apart at the beginning of the game or whenever you shuffle your deck, the word Staple tends to refer to Resources. Most cards require between 1 and 4 of these Staple Resources in play to meet the threshold indicated by Resource icons on cards. The Resource icons come in the form of five trades.

To supplement the Staple Resources, players may play any card from their hand face down as a Resource; however, cards played face down in this manner will not count towards the Resource threshold.

Playable cards come in several types, not counting Staples: Characters, Items, Tactics, and Locations. Each of these types often have subtypes. To win the game, the opponent's Faction must be reduced to 0 influence. The Tournament Faction starts with 25 influence. The Faction's influence may be reduced by attacking it with Characters, or by using Tactics or special abilities. Characters have three stats: Strength (amount of damage the Character deals), Life (amount of damage needed to destroy the Character), and Speed (faster Characters deal their damage earlier).

The game was officially announced dead in the official sites forums after the company could no longer find investors for the product. This occurred in early 2008.

However, as of 20 January 2009, the company Arcane Tinmen have purchased the rights to The Spoils, and have hired several members of Tenacious Games to resume production. Fantasy Flight Games is the US distributor of Arcane Tinmen and had a viral marketing campaign at Gen Con 2009 about Spoils including T-Shirts and promo cards. 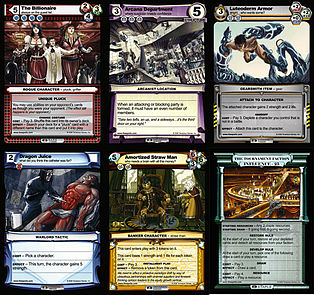 The Spoils cards are designated by various types and trades. 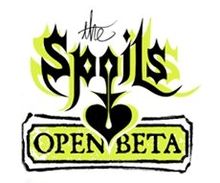 From August 1, 2006 through the October, 2006 launch date of The Spoils, Tenacious Games supported the release of a limited set of Open Beta cards of The Spoils Tournament Card Game with over 1000 free tournaments and over $60,000 in prize money.

In 2007, sanctioned tournament play was officially titled The Spoils Tournament Experience and given an official overall prize total of US$1,000,000.00.

Under the management of Arcane Tinmen, tournaments have begun to spring about again. Although none of them have had prize support nearly as grand as the original $1,000,000.00 tournament that Tenacious had originally sponsored, several tournaments have been held in conventions such as the annual World Championships at Gen Con, Origins Game Fair, Dragon Con, Tidewater Comic Con, and MegaCon.

Within Australia, the United Kingdom, France, Chile, Germany, and other countries, Arcane Tinmen has launched a new players promotion & championships which are composed of a series of events.

To date there have been nine sets released between Tenacious Games and Arcane Tinmen. Beta was a limited edition set that was a precursor to 1st Edition. 1st Edition, and 1st Edition Part 2 was combined and reprinted at a later date as the 'core' set, or 2nd Edition. Seed I, II, and III have been combined and reprinted, along with over forty new cards and alternate artwork, as Seed Saga: The Descent of Gideon (formerly codenamed "Andreessen")

Project "Shh", "Be" and "Quiet" was announced on February 21, 2012.
"Shh" was the code name of Shade of the Devoured Emperor. Shade (for short) is the first of 3 sets in the Unlikely Heroes block. The Shade set was released on Oct 5, 2013 and is going to be 130 cards. The set will be sold in 13 card booster packs and will contain commons, uncommons, rares and foils (premium cards). The second set in the "Unlikely Heroes" cycle, Holy Heist, was released in April 2015. The latest set, Seed Saga: The Descent of Gideon was released on August 22nd 2015 worldwide. The next set, Ungodly Mess, is due sometime in Q4 of 2015 or Q1 of 2016.

The Spoils is notable for its tongue-in-cheek style, most noticeable in its art and flavour text.

An example would be A Series of Tubes: the artwork depicts a mass of large tubes connected together at certain points, and with a small sign beside them with a picture of a dump-truck inside a red forbidden circle, in reference to the Series of Tubes speech. The flavour text also reads "It's not a dump-truck."

The Gearsmiths have some of the most obvious references, with cards such as 1337!. As well as that, most of their flavour text is written in 1337, especially on the 31f cards like 3p1ph4ny 31f.