Blizzard Entertainment announced on August 23, 2013, that the TCG was discontinued, and that they would not be renewing the game's license. In March 2014, Blizzard released Hearthstone: Heroes of Warcraft that is an online collectible card game featuring many of the same characters, abilities and artwork.

Each player uses a hero card and a deck consisting of allies and other supporting cards, such as weapons, abilities, armor, items and quests. Many cards include a trait icon, which limits what heroes can include the card in their decks. Some booster packs also contain legendary rares, or loot cards (i.e. special versions of normal cards) which contain a scratch-off code. This code can then be redeemed in the online game for a virtual prize. The prizes include special tabards, gimmick items, non-combat pets, and mounts.

During play, players start with a single hero. Once per turn, players can play any card from their hand as a resource, which enables the payment of additional cards to augment the hero's powers or add additional members to his or her party. Once brought into play by paying the appropriate cost, all cards (except abilities) remain until destroyed or removed from play. As in games such as Magic: The Gathering, the goal is to reduce the remaining health of the opposing hero to zero. Unlike Magic, combat attacks are always directed at individual heroes or allies, rather than simply declaring an attack with a number of creatures. Furthermore, damage done to characters accumulates between turns, making combat more expensive for both the attacker and defender.

The following types of cards are featured in the game:

Twenty-one expansion sets (and one reprint set) were released for the WoW TCG. Cards were usually sold in booster packs, which contain 15 random cards - 10 commons, 3 uncommons, 1 rare or epic, and 1 hero card or loot card. Booster packs also had one UDE point card redeemable online. Starting with March of the Legion and ending with Twilight of the Dragons, booster packs contained 18 random cards due to more variation of card types: 2 extra commons and 1 extra uncommon. The color of the collector number printed on a card indicates its rarity, using a system similar to that of the online game: white for common, green for uncommon, blue for rare, purple for epic, and orange for legendary. 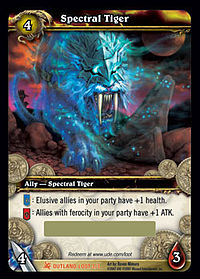 Certain sets also released with Starter Decks, containing a pre-constructed deck consisting of 33 fixed cards built around one of the 9 classes, 2 booster packs, 3 oversized hero cards and a rulebook. These decks contain 1 rare, 6 uncommons, and the rest are commons. Starter decks were released for Heroes of Azeroth, Through the Dark Portal, March of the Legion, and Drums of War. Class Decks and Champion Decks are other types of Starter Decks. The Battle Deck is a PvP variation of the Starter Deck that contains two pre-constructed decks consisting of 44 fixed cards, 3 oversized hero cards and 8 exclusive allies.

In addition to standard 2-player game play, the game also features Raid Decks, representing struggles involving large numbers of players against epic foes. Raid Decks are specially designed pre-constructed products used for a cooperative experience. They combine elements from the World of Warcraft (the team-based questing), and Dungeons & Dragons (the Raid Master). One player, the Raid Master controls all monsters and foes, while 3-5 other players control the characters participating in the raid.

A Raid Deck typically contains epic boss cards, decks for the boss characters, tokens to represent minions, custom rules for the raid, and a treasure pack, intended as a reward for players who are victorious in the raid. The treasure pack contains holofoils and sometimes contains a random insertion of a loot card. Upper Deck Entertainment also made treasure packs available from their UDE points store, although the cards in these packs are not holofoil.

Similar to Raid Decks, Dungeon Decks are large scale encounters designed for multiple players to play against. The main difference from Raid Decks is that a Dungeon Deck runs itself with no need for an additional player to act as the Raid Master. Additionally Dungeon Decks are designed to be played against basic starter decks with players unlocking the ability to add new cards by gaining experience from defeating dungeons and leveling up.

Some of the card art was done by Penny Arcade's Mike Krahulik ("Gabe"). In the May 26, 2006 update of the Penny Arcade site, Krahulik revealed his artwork for a card that was based on the exploits of Leeroy Jenkins.

Along with weekly battleground tournaments at local hobby stores, Cryptozoic Entertainment hosted Darkmoon Faires (DMF), events that ran Friday through Sunday in cities all across the world. Previously, the most notable competition featured was the Dream Machine Championship, which the winner received a custom built computer. Darkmoon Faire Championship Events offered electronics and travel vouchers to the top finishers of its main event. However, the Darkmoon Faire itself has been emphasized as a miniature convention featuring additional games, as well as side events for players to compete for Apple electronics, gift cards, and World of Warcraft loot cards.

The U.S. Nationals took place August 16-August 19, 2007 at Gen Con, a gaming convention in Indianapolis, Indiana. After the first day of constructed play, any player with a record of 5-3 or better advanced to day two. Two sets of draft were played on the second day, each set with three rounds. Players sat in draft pods based on their records from day one, where they drafted two packs of Heroes of Azeroth, and two packs of Through the Dark Portal. The finals were held on the third day, played between the top eight selected after draft play concluded. Brad Watson was declared the U.S. Nationals Champion after his victory in the finals.

In 2009, Corey-Scott Burkhart won the NACC at Gen Con Indy with a Shaman deck.

In 2010, under new management with Cryptozoic Entertainment, NACC moved out of Gen Con Indy. Tim Rivera claimed the title for that year in his hometown of Las Vegas.

The World Cup Championship took place March 4-6, 2011 in Paris, France. The winners were the American team The Warriors, composed of Ben Isgur, Matt Markoff, and James Kandziolka. They played, respectively: Boarguts the Impaler, Jumo'zin, and Erondra Frostmoon. Their prizes were the Darkmoon Faire tournament scheduled in Baltimore, Maryland along with $15,000 in Amazon vouchers.

The second World Championship took place in Paris, France from October 16-October 19, 2008. Jim Fleckenstein of Virginia won the title using the hero Kil’zin of the Bloodscalp.

The third World Championship took place in Austin, Texas from October 9-October 11, 2009. The format was Drums of War Block Constructed. It was won by William Postlethwait, also known as "Billy P."

The fifth World Championships took place in Rotterdam, Netherlands, from November 10-November 13, 2011. The format consisted of Core and Classic Constructed and Booster Draft. It was won by German player Hans Joachim Höh. He used a Rohashu Paladin deck, taking down Jim Fleckenstein´s less aggressive Rohashu version in the finals.