Star Wars: Customizable Card Game (SW:CCG) is a customizable card game based on the Star Wars fictional universe. It was created by Decipher, Inc., which also produced the Star Trek Customizable Card Game and The Lord of the Rings Trading Card Game. The game was produced from December 1995 until December 2001. Operation and oversight of the game was then taken over by a Decipher created volunteer group called the Star Wars Customizable Card Game Players Committee. To date, the Players Committee, or PC, still runs the game and creates new cards known as "virtual cards" that are released online in PDF format, and can then be printed and played with. You can also play SW:CCG online: Holotable.com is official Player Committee platform.

Star Wars CCG was first released in December 1995 after game play rights were purchased from a game designer. Over the years, Decipher added 11 full expansions to the original card base, as well as numerous smaller expansions, special purpose sets, and promotional releases. The last set, Theed Palace, was offered in the fall of 2001. The game spanned all of the classic Star Wars trilogy (A New Hope, The Empire Strikes Back, and Return of the Jedi) as well as The Phantom Menace. During several years of the game's run, between 1995 and 1998, it was a top-selling CCG, second only to Magic: The Gathering and occasionally surpassing Magic, according to both InQuest and Scrye magazines.

At the end of 2001, after much negotiation, Lucasfilm chose not to renew Decipher's license to use the Star Wars intellectual property. The license was granted to Wizards of the Coast, which used it to create their own game, the Star Wars Trading Card Game. Decipher can no longer legally create new expansions to SWCCG; many cards that were in development can never be released to the public.

As of 2016, SWCCG still has an active playing community. The game is administered by a Players' Committee, which interprets rules, organizes tournaments, and releases "virtual expansions" which give alternate game text for existing cards. The new "virtual cards" function as entirely new cards and keep the game environment constantly evolving. The "virtual card" overlays are available for free on the Players' Committee website, though players must have the original card to use its "virtual" version. To date, the Players' Committee has produced 8 blocks of virtual sets (over 20 total sets). SWCCG is also available online on Holotable. 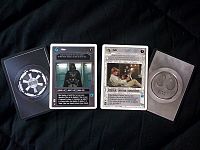 Dark and Light Side card fronts and backs; these two are character cards

Each game requires one player to play the Light Side of the Force while the other plays the Dark Side. In friendly play, a player can specialize in one side or the other, but for tournaments, players need both Dark and Light decks. This two-sided aspect is rare in customizable card games (Netrunner being the other notable example). The action of the game occurs at various "Location" cards (both interstellar and planet-bound) familiar from the Star Wars Universe. Locations can be deployed as the game progresses; furthermore, most locations come in both Dark and Light-side flavors, and an on-the-table location can be "converted" (changed to the other side) at any time. Most locations affect game play in some way; all also provide "Force icons," which represent the amount of "Force" a player can activate per turn.

Force is the game's resource, similar to "mana" from Magic: the Gathering; however, it is executed quite differently and is the game's defining trait. Each unit of "Force" is simply a card from the top of a player's deck, placed off to one side in the "Force Pile." When used to deploy something, each unit of Force is placed on another pile, the "Used Pile," which then cycles back to the bottom of the deck. Unused Force remains in the Force Pile, and can be conserved for the next turn or drawn into hand. The objective of the game is to force the opponent to discard all of their Life Force (consisting of Reserve Deck, Force pile and Used pile). This is accomplished via "Force Drains" (forcing the opponent to discard cards by controlling, unopposed, a location with their Force Icons on it), battling opposing characters, and resolving certain climactic situations (for instance, freezing a character in carbonite, winning a pod race, dueling a Jedi).

The game system also features "Destiny draws," which represents the elements of chance, uncertainty, luck, random chance and the Force. Each card has a destiny number, from 0 to 7, at the top-right corner (except locations, which count as destiny 0), and rather than using dice for generating random numbers, players "draw destiny" from the top of their deck, revealing the top card and using its destiny number as the result. This is used for a variety of purposes, from determining weapon hits to mandatory losses your opponent incurred to resolving whether a character passes a Jedi Test. The drawn Destiny card goes to the Used Pile and is recycled into the deck. Through this system, a skillful player can legally count cards, remembering where the high-destiny cards are in the deck. Finally, the stronger (or rarer) cards generally had lower Destiny values (though there were exceptions); as a result, less-experienced (or economically challenged) players are more likely to find that "The Force is with [them]."

While Decipher oversaw the game, no card was ever banned from tournament play. Instead, when a card or strategy was deemed abusive or too powerful, Decipher chose to release "magic bullets," new cards which were specifically designed to counter the offending strategy. In some cases, Decipher also used errata, modifications to game text of a card that supersede the actual printed version. The use of errata also contributes to a steep learning curve, since players need to be aware of the current meta-game at all times. Finally, the game was known for its quirky humor and inside jokes: one card, depicting Luke's protracted hand-stand during The Empire Strikes Back, was printed with all text upside-down. Another described a character as being Boba Fett's twin brother, since the same actor (Jeremy Bulloch) played both roles.

The following full sets were created by Decipher:

Decipher also reprinted four sets (Premiere, A New Hope, Hoth, and Dagobah). These reprinted cards sometimes had slightly different game text (or other parts of the card) to reflect errata that had been issued, and all of them had white borders which indicated an unlimited edition. Also, packs of revised A New Hope and Hoth were sold in 9-card packs rather than the original 15.

Several other products were released that did not include any cards unique to the set or were otherwise introductory game products:

Decipher's prize support for sanctioned tournaments initially consisted of unique T-shirts with card images printed on them along with some product (premiere packs). As time went on, these were replaced with the more economical but still appreciated FOIL versions of popular cards. State championships were also held annually, and Decipher supported these events with prizes including exclusive carrying cases and binders, which have become tough-to-find collectors items.

Despite the release of The Phantom Menace in 1999, Decipher planned to continue to release expansions based on the original trilogy. This decision was changed following the success of the Death Star II expansion and urging from both fans and LucasFilm. Three expansions and one mini-expansion were planned for release through to the end of their license agreement with LucasFilm at the end of 2001.

Initially, the Player's Committee released virtual cards in numerically identified sets. These sets were numbered as Virtual Sets 1-18. In August 2009, the existing 18 sets were reorganized thematically into 5 virtual blocks. What were to have been Virtual Sets 19-21 became known as Virtual Block 6 instead. New Virtual Sets are now released using the block numbering system.:

There are two major constructed formats for tournament play  - Open and Classic, which differ only in deck construction rules.

In the Open format, every card is legal. The only deck restrictions are that each deck must contain 60 cards from the same side of the Force and no more than 1 Objective card.

Classic format is intended to recreate the environment of the game before the Episode I sets (Tatooine, Theed Palace, Coruscant, and Reflections III), which many players viewed to have unbalanced game mechanics and broken continuity. The Classic format has the same deck construction rules as the Open format, but includes the following list of banned cards:

Another type of tournament was a sealed deck tournament. This would consist of players purchasing a Sealed Deck box (see above) and using its contents to construct a deck.

Starting in 2009 the first Official Sealed Deck World Championship Tournament took place in Princeton, New Jersey and Philadelphia, Pennsylvania in 2010. It has not been confirmed officially as to whether or not these tournaments continued from 2011-present, thus only the first 2 recorded Sealed Deck champions are listed:

In February 1997, Decipher launched the "Design-A-Card" contest. People from all over the world would have an opportunity to design the card they always wished were a part of the Star Wars Customizable Card Game. Decipher said the winner of the contest would win a display box of the "Special Edition" expansion set, and the winning card design would actually be printed and included in the "Special Edition" expansion set. On May 23, 1997, Guy Kargl was announced as the contest winner, with his S-Foils card design. In November 1998, Decipher released the Special Edition expansion set.

Decipher produced two other TCGs based on the Star Wars universe: Young Jedi, based on the second Star Wars trilogy, and Jedi Knights. Neither of these games matched the popularity of SW:CCG. Both were discontinued when Decipher lost the Star Wars license.

In April 2004, Decipher announced a new game, Wars TCG, based on the game mechanics of SW:CCG. Wars TCG is set in a proprietary science fiction universe created specially for the game and owned by Decipher. Despite initial sales and critical success, the game failed to catch on with players and set 2 sales were lackluster. After the second set, the game was placed on "indefinite hiatus" by Decipher at the beginning of May 2005, and was officially canceled in September 2005. There are still ebooks by Michael A. Stackpole and Chuck Kallenbach on the Decipher website.