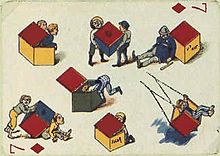 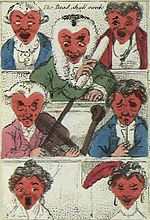 7 of Hearts from Metastasis

By the 19th century, the standard form for playing cards had become fixed in most of Europe and America. French cards used hearts, diamonds, spades and clubs. German cards used acorns, leaves, hearts and bells. It was at this time that designers in Germany, France and England began to draw small figures around the pips.

The first transformation playing cards were created by D.W. Soltan and D. Berger in 1801 as illustrations for a German edition of Hudibras. The cards illustrated were the 2 of hearts, 3 of hearts, 5 of hearts and 8 of hearts. In 1803, John Nixon published the first complete set (52 cards) of transformed cards. Titled Metastasis, this collection was also published as illustrations on sheets of paper. In 1804, J.C. Cotta, a publisher and bookseller in Tübingen, Germany, produced the first set of transformation cards that was published as an actual deck of playing cards. These decks were published as almanacs, in which each of the 52 cards corresponded to one of the 52 weeks of the year. 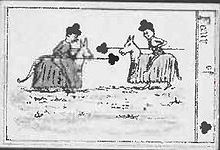 An example of a semi-transformed playing card, 4 of Clubs from Dean and Son

In 1865 Dean and Son published a deck in which the pips have been changed in both size and location, being placed at the artist's whim. Collectors debate as to whether or not this deck should be considered a transformation deck, due to these differences. The Dean and Son deck remained the only deck to manipuate the pips until the 1970s, when the practice gained some popularity. Today, cards that do not strictly adhere to standard pip placement, size and color are referred to as semi-transformation playing cards.

An article entitled "Playing Card Squiggles." was published in the December 1910 issue of Strand Magazine. Several Cotta cards were pictured, erroneously attributed to an unnamed French artist. Strand subsequently asked its readers to submit their own designs for card squiggles, which the magazine periodically published. John Butler Yeats was one of the first to contribute a card design to the magazine. The feature remained popular for some time. 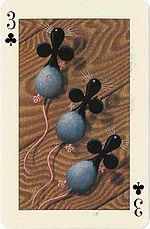 Transformation playing cards like Art for the Earth by The Friends of the Earth and Under the Sea by the Marine Stewardship Counsel, are created for charity purposes, with different artists contributing art for each card. Similarly, other collective projects like Ultimate Deck from Dan & Dave and Stranger & Stranger or the series from Black Rock Collective brings multiple artists together to create semi-transformation decks.

One of the more notable contemporary sets is the award winning The Key to the Kingdom, a semi-transformation deck commissioned by London's V&A Museum of Childhood and created by Tony Meeuwissen. It won the WH Smith Literary Award for best illustration and The Designers and Art Directory Association of London gold award. This set of cards was created around the theme of nursery rhymes and poems. The cards were sold with a book containing each poem and a picture of the corresponding card on the opposite page. Additionally, the deck was constructed as a puzzle contest laid out in the form of an original poem. The poem gave clues to pick certain cards, which then could be decrypted into a secret message. The prize of $10,000 and a golden key was won by Susan Kavanagh of Essex.