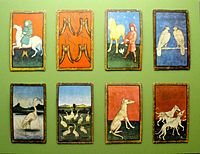 Facsimiles displayed in the Museum of Fournier de Naipes

The Ambraser Hofjagdspiel (Court Hunting Pack of Ambras), also called the "Ambras falconer cards", is a pack of cards painted around 1440-1445 and attributed to the engraver Konrad Witz from Basle, Switzerland. It originally consisted of fifty-six cards from which only 54 survive, all distributed in four suits, falcons, lures, hounds and herons, symbols related to hunting. Each suit contained ten pip cards with the 10s being represented by a banner like many old German playing cards and modern Swiss playing cards. There are four face cards per suit: the Unter, Ober, Queen, and King. It was found in a collection at the Ambras Castle, in Innsbruck, Austria, in the sixteenth century, and now figures as a precious item in the collection of cards of the Kunsthistorisches Museum in Vienna.