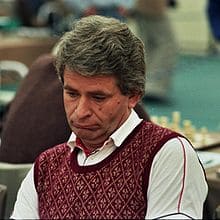 The 1969 World Chess Championship was played between Tigran Petrosian and Boris Spassky in Moscow from April 14 to June 17, 1969. Spassky won.

The 1967 Interzonal Tournament was played in Sousse, Tunisia in October and November. Bobby Fischer was leading the tournament with seven wins and three draws in ten rounds, however he abandoned the event over a dispute with the organisers. Because Fischer withdrew before he had played half his games, the results of his games were not included in his opponents' totals. Bent Larsen went on to win ahead of Viktor Korchnoi, Efim Geller, and Svetozar Gligorić, who shared second place.

Boris Spassky and Mikhail Tal were seeded into the Candidates matches as finalists of the previous tournament, and the top 6 finishers in the Interzonal would join them. Larsen, Korchnoi, Geller, Gligorić, and Lajos Portisch took the top five places. There was a three-way tie for sixth place among Samuel Reshevsky, Vlastimil Hort, and Leonid Stein, who played a round-robin playoff to determine the final place in the Candidates matches. The spot eventually went to Reshevsky, who drew all his eight games in the playoff. All three players ended up with 4 points, but Reshevsky had the best tie break score from the main tournament.

Spassky won the Candidates Matches to challenge Petrosian for the World Championship, which he did successfully. (Spassky had unsuccessfully challenged Petrosian in 1966.)

Larsen and Tal contested a third place playoff in the Dutch town of Eersel in March 1969, which Larsen won 5½-2½.

The match was played as best of 24 games. If it ended 12-12, Petrosian, the title holder, would retain the Championship.