A chess player is a human or computer that plays chess. 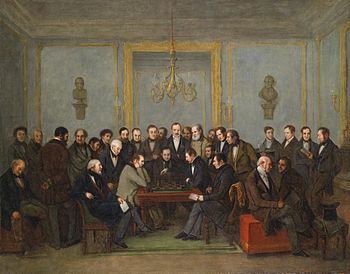 The World Chess Championship (WCC) is played to determine the human world champion in chess. All people are eligible to contest this title. The list of world chess championships reflects the variety of countries, cultures and academic backgrounds that chess players have been derived. The development of the World Chess Championship and the concept of a world chess champion started to emerge in the first half of the 19th century, and the phrase "world champion" appeared in 1845. 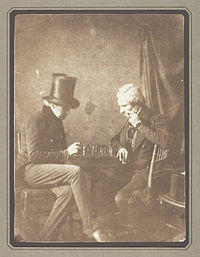 Over the years several "key" chess players have risen from relative obscurity to make significant contributions to chess through their instructional games, books and articles. Modern chess players owe a great debt to these players.

François-André Danican Philidor (1726-1795) in 1741 was being instructed by Legall de Kermeur (1702-1792), the leading French player until three years later when Philidor overtook his instructor. He went to London in 1747 and started playing chess at Slaughter's Coffee House. There, he beat Philipp Stamma (1715-1770) and Sir Abraham Janssen (1720-1795), two of England's top chess players. In c.1755 he again defeated Legall in a chess match at the Café de la Régence, it was said that Philidor was the only chess player that ever beat him. As a chess player he is remembered by the opening named after him the Philidor Defence and as the author of an important study: ''L'analyse des Jeux des Échecs'' (1749) translated as Analysis of the Game of Chess in which he stated one of the most often coined phrases in chess, "Pawns are the Soul of the Game". The book went through more than one hundred editions in ten languages. Philidor's book revolutionized chess play and laid down the principles of chess in a legible manner. Philidor became known for his simultaneous displays of blindfold chess, which captured the imagination of an ever growing group of chess fans. He claimed to have learned to do this when he could not sleep at night and played chess without sight of a board. Philidor played chess with many famous people of the times including Voltaire, Frederick the Great, Napoleon III and Jean-Jacques Rousseau, all determined but weak chess players.

Howard Staunton (1810-1874) was born in Westmoreland, England. Staunton learned the rules of chess at the late age of 19 and began to take the game seriously in 1836 when he went to London, England. Staunton played chess at Simpson's Divan in the Strand where many famous chess players met; within four years he had improved dramatically. He became the editor of several chess magazines including: England's first successful chess magazine British Miscellany later called the Chess Player's Chronicle (c.1841); Illustrated London News (c.1845); The Chess World (c.1865). Staunton won and lost several matches in England, then travelled to Paris and on November 14, 1843, he began a rematch with Pierre Charles Fournier de Saint-Amant (1800-1873) for £100. The match was held at the Café de la Régence with Staunton winning with 11 wins, 6 losses and 4 draws. He successfully used the opening 1.c4, which became known as the English opening. Following the match Staunton was recognized as the world's strongest chess player. The follow-up match was cancelled due to Staunton catching pneumonia. Staunton's considerable chess writings include: The Chess-player's Handbook (c.1847 ); The Chess-Player's Companion (c.1849); Chess Player's Text Book (c.1849); The Chess Tournament - London 1851 (c.1852); Chess Praxis (c.1860); Chess: Theory and Practice - published posthumously (c.1876). Staunton was responsible for many firsts in chess; the use of seconds (c.1843); played a chess game by telegraph (c.1845); endorsed the Staunton chess set (c.1849); claimed the Staunton Gambit 1.d4 f5 2.e4 (c.1847); and introduced the Chess Clock (c.1852). In c.1851, Staunton organized the world's first international chess tournament in London; he lost 4 wins, 1 loss, to Karl Ernst Adolf Anderssen (1818-1879), who went on to win the tournament.

Paul Charles Morphy (1837-1884) was born in New Orleans, Louisiana. Legend has it Morphy learned the game of chess at a young age by watching his father and Uncle Ernest playing. As fate would have it, his uncle was a prominent member of the New Orleans Chess Club and he encouraged the young genius to pursue the game. As Morphy was not yet 21 years of age he could not practice law and was persuaded by family and friends to travel to Europe and challenge the best chess players of the time, including Howard Staunton (1810-1874), whom he considered the best player in the world. During his time in Europe between 1857 to 1859, the always polite and refined Morphy completely dominated his opponents and he altered chess history for all time. In England, he engaged Reverend John Owen (1827-1901), considered one of England’s best, giving Owen pawn and move odds, Morphy easily defeated him 5 - 0 with two draws. Then traveling to France he next played Daniel Harrwitz (1823-1884), who was the best player at the 'Café de la Régence'. Harrwitz was losing the match 5½ - 2½ and threw in the towel early. Morphy gave a simultaneous blindfold exhibition match against eight opponents, winning all eight and capturing the imagination of France. Next was Adolph Anderssen (1818-1879) a professor of mathematics with Morphy winning 7 - 2. Staunton no longer being in top form and with other obligations, avoided a match with the dismayed Morphy. It is believed that Morphy would have easily defeated Staunton. Morphy returned home on May 11, 1859, to a hero's welcome, he was received as the best chess player in the world, setting off a 'Morphy-Mania' across the United States. Morphy considered the "pride and sorrow of chess" renounced chess in 1863 never to play a serious match again.

Wilhelm Steinitz (1836-1900) was born in Prague, Bohemia, which was part of the Austro-Hungarian Empire. Steinitz was born lame, walked with a limp and grew to barely 5 feet in height. He learned to play chess at the age of 12, but his interest in chess developed while studying at Vienna Polytechnicum with a major in mathematics. As an impoverished student, Steinitz saw chess as a chance of making money playing in the Viennese coffee-houses. In 1861, he became the champion of Austria and a professional chess player. Steinitz immigrated to London, England in 1862 and chess became his primary occupation. Steinitz was a correspondent of the chess magazine The Field from 1872 to 1882 and used this to present his ideas about chess strategy. In 1885 he founded the International Chess Magazine and edited it until 1891. In 1889, he published an influential textbook, The Modern Chess Instructor. In 1866, Steinitz defeated Adolph Anderssen in a match finishing with a score of 8 wins, 6 losses and 0 draws. Steinitz later claimed that this was the beginning of his world championship reign. One of his pupils, a Polish chessplayer, Johannes Zukertort (1842-1888) became Steinitz greatest rival. In 1872, Zukertort was thoroughly beaten by Steinitz. Steinitz playing style began to evolve from being mainly a tactical chessplayer, to becoming the first strategic player in chess history. During this time in the history of chess, games were notable for their brilliant sacrifices and winning attacks. Steinitz went against current practice by maintaining that a game could not be lost without the loser making a mistake. He believed that victory cannot be obtained by force alone, rather by the accumulation of small advantages as part of a strategic plan. The advantages came from sound moves in the development of the pieces and pawns, creating a sound pawn structure, increased space and the battle between bishop and knight. At the time, his theories were called 'Modern' but contemporary times term them 'Classical'. The first official World Championship match began on January 11, 1886, in Cartier's Hall on Fifth Avenue, New York, USA; between Steinitz and Zukertort. For the first time, a large demonstration board was used to replay the moves to the crowd of spectators that had gathered to observe the games and each move was immediately cabled back to Europe. A Fattorini chess clock was used; it was a seesaw apparatus with the clock stopping, when in the down position. Steinitz won the historically significant match 10 wins, 5 losses. Steinitz defended his title until c.1894, losing it to Emanual Lasker (1868-1941, 5 wins,10 losses, and 4 draws. Later Lasker stated "I who defeated Steinitz shall do justice to his theories, and I shall avenge the wrongs he suffered." In 1897 after losing his rematch to Lasker, Steinitz had to be treated for a mental breakdown, which was to ail him for the rest of his life.

Emanuel Lasker PhD (1868-1941) was born in Barlinek, Poland. He was a mathematician, and philosopher and World Chess Champion from 1894 to 1921. In his prime Lasker was one of the most dominant champions, and he is still generally regarded as one of the strongest players ever. Visiting the Tea Salon Lasker learned how to play chess at a high level. He travelled the world playing chess in several countries with a successful tournament record against such famous players as, Max Euwe, José Raúl Capablanca, Alexander Alekhine, Mikhail Botvinnik, Samuel Reshevsky and Salo Flohr. In 1894, Lasker beat Steinitz to become the second world chess champion. Lasker wrote the books: A Player's Worldview; Lasker's Manual of Chess; The 1934 Alekhine-Bogoljubow Return Match for the World Championship; and published Lasker's Chess Magazine based in New York.

José Raúl Capablanca (19 November 1888 - 8 March 1942) was a Cuban chess player who was world chess champion from 1921 to 1927. One of the greatest players of all time, he was renowned for his exceptional endgame skill and speed of play. Due to his achievements in the chess world, mastery over the board and his relatively simple style of play he was nicknamed the "Human Chess Machine". Capablanca wrote many chess books including but not limited to: My Chess Career, Chess Fundamentals and Primer of Chess.

Alexander Alekhine (1892-1946) was the fourth chess world champion from 1927 to 1935 and 1937 to 1946. Alekine wrote over twenty books on chess including: My Best Games of Chess 1908-1923, My Best Games of Chess 1924-1937 and The World's Chess Championship, 1937. For all of Alekhine success over the chessboard he experienced many personal challenges including, drinking and times of poverty over his career.

Mikhail Botvinnik, PhD. (1911-1995) was an electrical engineer and the fifth world chess champion winning in 1948, 1951 and 1954. He was considered the first Soviet Chess School player. Both an avid writer about chess and computer chess, Botvinnik also founded the Botvinnik School of Chess, where the future world champion Garry Kasparov attended.

Computer chess is computer architecture encompassing hardware and software capable of playing chess autonomously without human guidance. The idea of creating a chess-playing machine dates back to the eighteenth century. Around 1769, the chess playing automaton called The Turk became famous before being exposed as a hoax. Before the development of digital computing, serious trials based on automata such as El Ajedrecista of 1912, were too complex and limited to be useful for playing full games of chess. The field of mechanical chess research languished until the advent of the digital computer in the 1950s. Since then, chess enthusiasts and computer engineers have built, with increasing degrees of seriousness and success, chess-playing machines and computer programs.

In 1951, Alan Turing is the first to publish a program, developed on paper, that was capable of playing a full game of chess.

In 1962, the first program to play credibly, Kotok-McCarthy, is published at MIT.

In 2006, the undisputed world champion, Vladimir Kramnik, is defeated 4-2 by Deep Fritz becoming the first chess engine playing on a microcomputer to beat a human world chess champion.