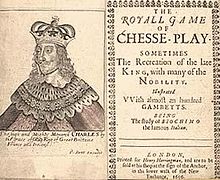 Gioachino Greco (c. 1600 - c. 1634) was an Italian chess player and writer. He recorded some of the earliest chess games known. His games, all against anonymous opponents ("NN"), were quite possibly constructs (Hooper & Whyld 1992), but served as highly useful tools for spotting opening traps.

Gioacchino Greco was also known in Italy as "il Calabrese", which means "the Calabrian". Some sources quote that his parents were Greeks and that he had been born at Celico, a village near Cosenza (Murray 2012:828). In fact, during the late 1490s and early 1500s the Peloponnese had been conquered by the Ottoman Turks. Until the early 1600s at least 150,000 Greeks fled Peloponnese then for Calabria, Salento and Sicily, places where older Greek communities existed (see also antiquity’s Magna Graecia). They spoke either Greek or a Greek-Arbanite mixed language. Their rite had been Orthodox Christian, but gradually changed to Byzantine Catholic and finally Roman Catholic. The newcomers, as long as the local Greeks in Calabria, Salento and Sicily, had mainly rural activities, spoke Greek and mainly could not write or read. The Greco's parents were poor villagers, while Greco himself was a person with high ambitions, an acute mind and an insatiable will for travels and playing chess. Chess had been a common game in South Italy at the time Greco lived. Greco earned his living by playing chess and betting on the victory. Yet he had been robbed in central Europe at least once. His Greek last name is not certain, while his first name was “Ιωακείμ” in Greek, “Gioacchino” in Italian.

Greco was a remarkable chess player between Ruy López de Segura and François-André Danican Philidor, and authored a famous manual containing many traps and checkmating patterns. As one of the players during the age of "Italian Romantic Style", he studied the Giuoco Piano (1.e4 e5 2.Nf3 Nc6 3.Bc4) and published his analysis in the form of short games around 1625. In 1656, after his death, the manuscripts were published by Francis Beale in London. These games are regarded as classics of early chess literature and are sometimes still taught to beginners.

Greco paved the way for many of the attacking legends of the Romantic era, such as Adolf Anderssen, Paul Morphy, and François Philidor.

Among his games/constructions were the first smothered mate:

and this impressive queen sacrifice:

This composition by Greco uses the theme of the wrong rook pawn: