François-André Danican Philidor (September 7, 1726 - August 31, 1795), often referred to as André Danican Philidor during his lifetime, was a French composer and chess player. He contributed to the early development of the opéra comique. He was also regarded as the best chess player of his age; his book Analyse du jeu des Échecs was considered a standard chess manual for at least a century, and a well-known chess opening and a checkmate method are both named after him.

François-André Danican Philidor was born to his father’s second wife, Elizabeth Le Roy, whom he wed in 1719 when she was 19 years old and he 72. When François-André was born, his father was 79 years old; he died 4 years later and left his son fatherless. 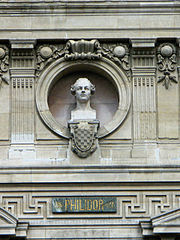 Philidor's bust on the façade of the Opera Garnier in Paris

Philidor joined the royal choir of Louis XV in 1732 at the age of six, and made his first attempt at the composition of a song at the age of 11. It was said that Louis XV wanted to listen to the choir almost every day, and the singers, while waiting for the king to arrive, played chess to relieve their boredom; this may have sparked Philidor's interest in chess.

From around 1740 he lived and worked in Paris as a performer, teacher and music copyist. He was the teacher of the Bohemian composer and pianist Ludwig Wenzel Lachnith. During this time he met Diderot, who calls him 'Philidor le subtil' in Le neveu de Rameau. He spent much of the period 1745-54 in London after a concert tour of the Netherlands collapsed, and moved in the same circles as Dr Johnson and Dr Burney. He returned to the French capital in 1754, although his music was found by some to be too Italianate (as a result of his travels). However he scored several triumphs at the fair theatres, starting with Blaise le savetier in 1759. His three most successful works were Le sorcier (1764), Tom Jones (after Henry Fielding, 1765), and Ernelinde (1767).

For a time Philidor was among the leading opera composers in France, and during his musical career produced over 20 opéras comiques and two tragédies-lyriques. He also wrote secular cantatas and motets.

Philidor started playing regularly around 1740 at the chess Mecca of France, the Café de la Régence. It was also there that he famously played with a friend from 'New England', Mr. Benjamin Franklin. The best player in France at the time, Legall de Kermeur, taught him. At first, Legall could give Philidor rook odds, a handicap in which the stronger player starts without one of his rooks, but in only three years, Philidor was his equal, and then surpassed him. Philidor visited England in 1747 and decisively beat the Syrian Phillip Stamma in a match +8−1=1, even though Philidor let Stamma have the white pieces in every game, and scored all draws as wins for Stamma. The same year, Philidor played many games with another strong player, Sir Abraham Janssen, who was then the best player in England, and with the exception of M. de Legalle, probably the best player Philidor ever encountered. He could win on an average one game in four off Philidor, at even terms; and Philidor himself declared that he could only give to Janssen the pawn for the move.

In 1754, Philidor returned to France, after nine years of absence spent mostly in Holland and England. He was now a much stronger player, having successfully played with opponents of the calibre of Philip Stamma and Abraham Janssen, but, as G. Allen reports in The life of Philidor, it was not until his match with de Legal in 1755 that he can be considered the strongest player in the world.

When Philidor left Paris, in 1745, although he had for some time been playing even games with M. de Legal... he had not ceased to recognize his old master as still his master and superior. But nine years of practice, with a great variety of players, had authorized him to look for neither superior nor equal; and when, in 1755, a match was arranged between the pupil and his master, who was still at the height of his strength, the result placed the crown firmly and indisputably upon the head of Philidor.

In 1771 and 1773 Philidor made brief stays in London to play at the Salopian coffee-house, Charing Cross and at the St James Chess Club. In 1774 the Parloe's chess club, on St James street, in London, was created and Philidor obtained a remuneration as a chess master every year, for a regular season from February to June. Philidor stayed faithful to this agreement until the end of his life and he was replaced by Verdoni only after his death. It is rightly in this place Philidor encountered Mr. George Atwood, famous mathematician and physician, lecturer at Cambridge University. In an article of J. J. O'Connor and E. F. Robertson , devoted to George Atwood, there is the following passage:

Atwood was a renowned amateur chess-player and among other opponents played games against the famous French player Philidor, who was regarded as the unofficial world champion.

Of the players who encountered Philidor, Sir Abraham Janssens, who died in 1775, seems to have been the best, Mr. George Atwood, a mathematician, one of Pitt's secretaries came next, he was of a class which we should call third or two grades of odds below Philidor, a high standard of excellence to which but few amateurs attain. One of most interesting features of Atwood as a chess player is that he recorded and preserved some of his games, an unusual practice at that time. These records have survived, among them the last games that Philidor played which were against Atwood at Parsloe's Club in London on 20 June 1795.

In England, Philidor astounded his peers by playing three blindfold chess games simultaneously in the chess club of St. James Street in London on 9 May 1783. Philidor let all three opponents play white, and gave up a pawn for the third player. Some affidavits were signed, because those persons who were involved doubted that future generations would believe that such a feat was possible. Today, three simultaneous blindfold games would be fairly unremarkable among many chess masters. Even when he was in his late years, when he was 67 years old (1793), he played and won two blindfold games simultaneously in London.

Philidor, both in England and France, was largely recognized in each of his fields and got a lot of admirers, protectors and also friends, like were the French philosophers Voltaire, Rousseau and the famous English actor David Garrick (1717-1779).

In December 1792, however, when he was age 65, Philidor had to definitively leave France for England. He was fleeing the French Revolution (1789-1799), because his name figured on the Revolutionary banishment list, established by the Convention nationale. This was not probably due to his ideas (indeed it seems Philidor was rather reserved about his opinions apart from music and chess), but very likely in view of the traditional attachment of his family to the King's family service .

Andrew Soltis writes that Philidor "was the best player in the world for 50 years. In fact, he was probably about 200 rating points better than anyone else yet alive - set apart by the mysteries of the game he had solved."

500 years ago chess was different from today. Pawns didn't cost as much as they do today. The best players started games with the gambits. Pawns were only a small price to: Open a file or diagonal; Create an immediate attack on an opponent's king. It was the Italian style of chess. All positions of the King's Gambit were very popular... The best chess player of his day was Francois Andre Danican-Philidor... His published chess strategy stood for a hundred years without significant addition or modification. He preached the value of a strong pawn center, an understanding of the relative value of the pieces, and correct pawn formations...

Jacques François Mouret, one of the best French players of the early 19th century, was Philidor's great-nephew.

In 1749, Philidor published his famous book Analyse du jeu des Échecs. He printed a second edition in 1777, and a third edition in 1790. The book was such an advance in chess knowledge that by 1871, it had gone through about 70 editions, and had been translated into English, German, Russian and Italian. In it, Philidor analyzed nine different types of game openings. Most of the openings of Philidor are designed to strengthen and establish a strong defensive center using pawns. He is the first one to realize the new role of the pawn in the chess game; and his most famous advice was the saying "The pawns are the soul of chess." More precisely Philidor said:

Translation: My main purpose is to make myself commendable by a novelty of which no one was aware or perhaps was capable [of discovering]; this is to play the pawns well; they are the soul of chess: it is they which uniquely determine the attack and the defence, and on their good or bad arrangement depends entirely the winning or losing of the game.

It was said that the reason why Philidor emphasized the pawns in the chess game was related to the political background during the eighteenth century of France, and that he regarded pawns as the "Third rank" on the chess board (citizens were regarded as the third rank of the society before the French Revolution started in 1789). He also included analysis of certain positions of rook and bishop versus rook, such analysis being still current theory even today. He is most famous for showing an important drawing technique with a rook and pawn versus rook endgame, in a position known as the Philidor position. The Philidor Defense (1.e4 e5 2.Nf3 d6) is named for him. Philidor’s book was the very first (1) that gave detailed annotations on how to play the middlegame, (2) that presented chess strategy as a whole, and (3) that presented the concepts of the blockade, prophylaxis, positional sacrifice, and mobility of the pawn formation.

Early critics of the Analyse du jeu des Échecs include those of the Modenese School (Ercole del Rio, Lolli or Ponziani), who in contrast to the French, advocated a free piece play, gambit openings and tactical complications; they also found some of the variations reported in the Analyse to be unsound (in particular those related with f7-f5 push in the Philidor Defence 1.e4 e5 2.Nf3 d6 3.d4 f5). Some of Philidor's disciples -- Bernard, Carlier, Leger, and Verdoni, who met at the Café de la Régence under the name of Société des Amateurs - also criticized his work. In their book, Traité des Amateurs, they expressed many criticisms and comments on his earlier printed book, arguing that the variations reported in Philidor's Analyse are more instructive than correct. Nevertheless, the games of the Traité can be regarded, together of those of Philidor, as typical examples of the understanding of chess during the Enlightenment, and the Société des Amateurs was much closer to Philidor than to the Modenese school.

Philidor was stranded in England when the French Revolution occurred. Because of many of his social connections mentioned above, the Revolutionary Government put him on the banned list. He died on August 31, 1795, in London and was buried in St James, Piccadilly. A few days later, his relatives succeeded in getting his name removed from the list.

Chess topics named after him

A one-act opéra-comique with music by Amédée Dutacq and libretto by Abraham Dreyfus entitled Battez Philidor ! (Beat Philidor!) was premiered on 13 November 1882 at the Opéra-Comique. Set in 1777, a poor musician is required to beat Philidor at chess before he can win the hand of his sweetheart. Although Philidor agrees to lose the match to help out, by distraction he nonetheless wins the game, although all turns out well for the lovers in the end. Battez Philidor ! also features Philidor's sometime collaborator A A H Poinsinet.