Pierre Charles Fournier de Saint-Amant (12 September 1800 - 29 October 1872) was a leading French chess master and an editor of the chess periodical Le Palamède. He is best known for losing a match against Howard Staunton in 1843 that is often considered to have been an unofficial match for the World Chess Championship.

Saint-Amant learned chess from Wilhelm Schlumberger, who later became the operator of The Turk. He played at the Café de la Régence, where he was a student of Alexandre Deschapelles. For many years he played on level terms with Boncourt, a strong player, and received odds of pawn and two moves from Deschapelles and Louis-Charles Mahé de La Bourdonnais. In 1834-36, he led a Paris team that won both games of a correspondence chess match against the Westminster Club, then England's leading chess club. After La Bourdonnais' death in 1840, he was considered the country's best player. In December 1841 he revived Le Palamède (at its inception in 1836 the world's first chess periodical), which ran until 1847.

He played two matches against Staunton in 1843. The first, in London, he won 3½-2½ (three wins, one draw, two losses), but he lost a return match in Paris just before Christmas 13-8 (six wins, four draws, eleven losses). This second match is sometimes considered an unofficial world championship match.

In 1858, Saint-Amant played in the Birmingham tournament, a knockout event. He won in the first round, but lost in the second by a 2-1 score to Ernst Falkbeer. Returning to Paris, he witnessed the adulatory reception accorded Paul Morphy at the Café de la Régence. The score of one game between them is known, a 22-move rout by Morphy of Saint-Amant and his consultation partner, given as "F. de L." or "F. de L'A".

Outside of chess, Saint-Amant became a government clerk in Paris at an early age. He then served as the secretary to the governor of French Guiana from 1819 to 1821. He was dismissed from that appointment after he protested against the slave trade that still existed in that colony. After that, he tried his hand as a journalist and actor, then became a successful wine merchant. He was a captain in the French National Guard during the 1848 revolution. For his role in saving the Palais des Tuileries from destruction by the mob, he was made its Governor for a few months. In 1851-52, he was the French consul to California. Upon returning to France he spent some years writing well-regarded works on the French colonies, and a treatise on the wines of Bordeaux.

In 1861 Saint-Amant retired to Algeria. He died there in 1872 after being thrown from his carriage.

Reuben Fine writes that although Saint-Amant lost his epic match against Staunton, in the 13th match game, playing White, "he at least had the satisfaction of winning the most brilliant game."

In the 9th match game, Saint-Amant had pulled off a swindle that grandmaster Andrew Soltis considers the greatest ever perpetrated in match play. 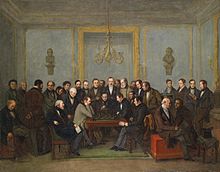 A depiction of the chess match between Howard Staunton and Pierre Charles Fournier Saint-Amant, on 16 December 1843 by Jean-Henri Marlet.