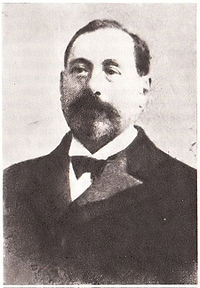 Taubenhaus was a foremost Warsaw chess player in late 1870s. In 1880, he settled in Paris. In the 4th international Congress of the German Chess Association (DSB) at Hamburg in July 1885, he took 14th place. His best achievement was the London tournament of 1886, where he tied for 3rd-4th places together with Isidor Gunsberg, after Joseph Henry Blackburne and Amos Burn, in strong London competition. He had significant victories over Blackburne, unchallenged leader of English chess, and Gunsberg, Steinitz’s opponent in later match for the world championship. In 1886, he took 6th at Nottingham. In 1887, he took 19th at Frankfurt (5th DSB Congress). In 1888, he took 8th at Bradford. In 1889, he tied for 12th-13th at New York (6th US Congress). In 1890, he took 10th at Manchester (6th BCA Congress).

Taubenhaus is the author of “Traité du Jeu d’Échecs," published in 1910.

Taubenhaus was a primary operator of the remote-controlled Mephisto chess player machine. The third automaton Mephisto was made by Charles Godfrey Gumpel, and unlike its predecessors The Turk and Ajeeb, it had no hidden operator and functioned by electro-mechanical means. Gumpel took a few years to build it and it was first shown in 1876 at his Leicester Square home in London. It was the first automaton to win a chess tournament when it was entered in the Counties Chess Association at London in 1878. Mephisto was operated by Isidor Gunsberg in the main. It was shown regularly for 10 years, and at one time had its own club in the UK. When Mephisto went to the Paris Exposition in 1889 it was operated by Taubenhaus. After 1889 it was dismantled and its subsequent whereabouts are unknown.