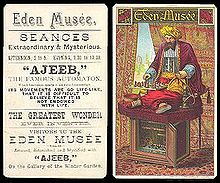 An advertisement for an exhibition of Ajeeb, including an illustration of its appearance. Ajeeb was an imitation of the Turk.

Ajeeb was a chess-playing "automaton", created by Charles Hooper (a cabinet maker), first presented at the Royal Polytechnical Institute in 1868. A particularly intriguing piece of faux mechanical technology (while presented as entirely automated, it in fact concealed a strong human chess player inside), it drew scores of thousands of spectators to its games, the opponents for which included Harry Houdini, Theodore Roosevelt, and O. Henry. The device's name was derived from the Arabic/Urdu/Persian word عجيب (ʿajīb) meaning "wonderful, marvelous."

In the history of such devices, it succeeded "The Turk" and preceded "Mephisto".