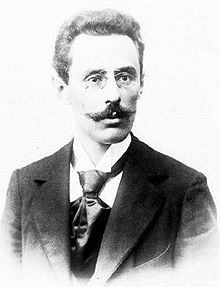 Born into a Polish family in Wołkowysk, Russian Empire (now Belarus), he settled in Paris around 1890 and began his professional chess career in 1894. He won tournaments in Monte Carlo 1901, Hanover 1902 and tied for first at Vienna 1902 and Barmen 1905. In 1915 he left Europe for the United States and spent the next nine years there before returning to Paris.

Janowski played very quickly and was known as a sharp tactician who was devastating with the bishop pair. Capablanca annotated some Janowski games with great admiration, and said, "when in form [he] is one of the most feared opponents who can exist". Capablanca noted that Janowski's greatest weakness as a player was in the endgame, and Janowski reportedly told him, "I detest the endgame." American champion Frank Marshall remembered Janowski's talent and his stubbornness. In "Marshall's Best Games of Chess" he wrote that Janowski "could follow the wrong path with greater determination than any man I ever met!" Reuben Fine remembered Janowski as a player of considerable talent, but a "master of the alibi" with respect to his defeats. Fine said that his losses invariably occurred because it was too hot, or too cold, or the windows were open too far, or not far enough. He also noted that Janowski was sometimes unpopular with his colleagues because of his predilection for doggedly playing on even in an obviously lost position, hoping his opponent might blunder. Edward Lasker in his book Chess Secrets I Learned from the Masters recalled that Janowski was an inveterate but undisciplined gambler who would often lose all of his chess winnings at the roulette wheel.

Janowski played three matches against Emanuel Lasker: two friendly matches in 1909 (+2 -2 and +1 =2 -7) and one match for the world chess championship in 1910 (=3 -8). The longer 1909 match has sometimes been called a world championship match, but research by Edward Winter indicates that the title was not at stake.

In July-August 1914, he was playing an international chess tournament, the 19th DSB Congress (German Chess Federation Congress) in Mannheim, Germany, with four wins, four draws and three losses (seventh place), when World War I broke out. Players at Mannheim representing countries now at war with Germany were interned. He, as well as Alexander Alekhine, was interned but released to Switzerland after a short internment. Then he moved to the United States, where he shared first place with Oscar Chajes, ahead of José Raúl Capablanca, at New York 1916, won at Atlantic City 1921 (the eighth American Chess Congress) and took third place at Lake Hopatcong 1923 (the ninth ACC).

The Janowski Indian Defense is named after him.