Card throwing is the art of throwing standard playing cards with great accuracy and/or force. It is performed both as part of stage magic shows and as a competitive physical feat among magicians, with official records existing for longest distance thrown, fastest speed, highest throw, greatest accuracy and greatest number of cards in one minute.

First popularized in the West among stage magicians during the 1800s, the art of throwing cards is called scaling. Techniques used among performers today are attributed to stage magicians in the late 19th Century. The exact origins of "flying card" tricks are unknown, but Alexander Herrmann is widely attributed with first including card throwing in a major act. He would use custom made cards, sign them, and then throw them into the audience as potential souvenirs. The magician Howard Thurston also used card throwing as a major part of his act. The cards that they used, however, were heavier than those commonly used today.

Many magicians commissioned specially printed cards, known as throwing cards, throwouts, scaling cards or souvenir cards to use for these purposes. Generally, such cards featured the image and name of the magician, and often featured optical illusions, mystical images, and text and graphics from other advertisers.

Today, magicians all over the world use card throwing as parts of their act. Ricky Jay, Jim Karol, and Rick Smith, Jr., all world class card throwers and magicians, are among the most well known people to frequently use card throwing during performance.

Playing cards and similar paper objects have very little mass and are not very aerodynamic except under certain circumstances. Simply throwing a card with no technique (that is, applying lateral speed only) usually will result in it fluttering about and falling to the ground. Achieving accuracy, distance and force with a card requires giving it both lateral speed and angular momentum (i.e. "spin") along its z-axis. The spin creates gyroscopic stabilization so that the card's flat profile remains mostly parallel to the direction of travel and thus suffers the least possible air resistance. 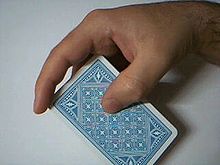 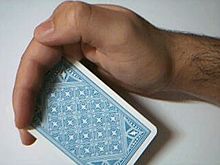 There are multiple techniques for throwing cards in this manner. The technique often attributed to Alexander Herrmann, and taught in Ricky Jay's book Cards as Weapons (1977), involves gripping the middle of the card horizontally between the thumb and the middle finger, while the index finger rests on the corner of the card nearest the hand and away from the body. The wrist is cocked inward at a 90 degree angle, then flicked briskly outward, propelling the card. For distance and power, the technique adds motion of the forearm bending at the elbow straight outwards from a 90 degree angle simultaneous to the flicking motion of the wrist. In another method created by Howard Thurston, the card is gripped between the first and second fingers, usually of the left hand and propelled in a similar manner. There are also variations on both grips and throwing styles, some which depend on the type of flight the magician is attempting to achieve.

Forceful throws will usually spiral somewhat on the way to the target when thrown at long distance, since most cards are not perfectly flat. With a given deck, the bend of the cards are usually similar enough to each other that this spiral is easily predictable, and a practiced magician can hit very small targets even at many yards away. It is also possible to throw a card very flat at lower speeds to get the card to land in or on top of something.

Many tricks done with thrown cards are designed not only impress with the magician's dexterity, but work on a common theme in stage magic: the illusion of danger. While the illusion of danger can be achieved by outright deception, another method is to play on people's popular misconceptions. In the case of card throwing, the magician achieves this effect by throwing the card at fragile targets such as newspaper, cigarettes, fruit, hot dogs, foam, or any other substance that the card will easily imbed in or break. While none of these objects act like human tissue in terms of wound ballistics, the magician is counting on most audience members thinking they actually are comparable, and therefore believing he or she has turned a harmless playing card into a deadly projectile.

The current world record for farthest card thrown is held by Rick Smith, Jr. who threw a card 65.96 meters (216 feet, 4 inches) on December 2, 2002. This is also the current record for the fastest throw, clocked at 148 kilometers per hour (91.96 mph). Previous world record holders are Ricky Jay, Tommy Jackson and Jim Karol.

In October 2005, Chris Linn broke the Guinness World Record for the "most one fingered playing card scales in one minute". To break the record, Linn had to hold a deck of playing cards in one hand and use his thumb to propel ("scale") the cards from the deck a minimum distance of 12 feet. Linn was able to scale 114 playing cards in one minute, beating the previous record of 104 playing cards set by magician Jeff McBride. The record breaking attempt took place at Cedar Point Amusement Park in Sandusky, Ohio.

Urban legend about use as a weapon

The impressive speed that magicians could throw the cards gave rise to a myth that a card could kill or seriously injure someone if thrown correctly by a person with enough force. The book Cards as Weapons by Ricky Jay is believed to have propagated this myth even though it was originally intended to combine instruction with satire.

This myth was tested on the Discovery Channel program MythBusters, and subsequently debunked. Mythbusters' co-host Adam Savage was already quite familiar with the throwing card trick and was shown to be quite adept at performing it, with his maximum throwing speed being clocked at 25 miles per hour or 40 km/h. The episode also featured Ricky Jay himself, who spoke of writing the book and admitted he is most likely responsible for the genesis of the myth. The hosts were able to clock the speed of his throws at about 90 mph. After failing to throw the cards into a ballistic gelatin target with enough force that would result in injury, they used an electric motor to mechanically launch a card at 150 mph. Offering his own body as a target, host Jamie Hyneman allowed the launcher to be fired at his exposed skin from a few feet away, which only resulted in a superficial paper cut. The hosts concluded that a playing card lacks enough mass to transfer sufficient energy to human tissue on impact.