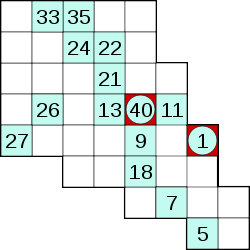 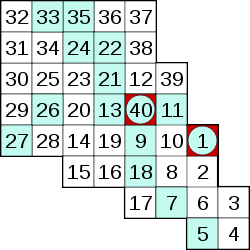 Hidato (Hebrew: חידאתו‎, originating from the Hebrew word Hida = Riddle) is a logic puzzle game invented by Dr. Gyora Benedek, an Israeli mathematician. The goal of Hidato is to fill the grid with consecutive numbers that connect horizontally, vertically, or diagonally. Numbrix puzzles, created by Marilyn vos Savant, are similar to Hidato except that diagonal moves are not allowed. Jadium puzzles (formerly Snakepit puzzles), created by Jeff Marchant, are a more difficult version of Numbrix with fewer given numbers and have appeared on the Parade magazine web site regularly since 2014. The names Numbrix and Hidato are registered trademarks. Some publishers use different names for this puzzle such as Number Snake.

In Hidato, a grid of cells is given. It is usually square-shaped, like Sudoku or Kakuro, but it can also include irregular shaped grids like hearts, skulls, and so forth. It can have inner holes (like a disc), but it has to be made of only one piece.

The goal is to fill the grid with a series of consecutive numbers adjacent to each other vertically, horizontally, or diagonally.

Note: the above condition on the smallest or highest numbers are sometimes relaxed: only their values can be given, without their positions on the grid (of course, the difference between these values must be equal to the number of cells in the grid minus one). This may lead to harder puzzles.

Every well-formed Hidato puzzle is supposed to have a unique solution. Moreover, a Hidato puzzle intended for human solvers should have a solution that can be found by (more or less) simple logic. However, there exist very hard Hidato puzzles, even of small size.

Hidato puzzles are published in newspapers such as the Daily Mail and Detroit Free Press.

As in many logic puzzles, the basic resolution technique consists of analyzing the possibilities for each number of being present in each cell. When a cell can contain only one number (Naked Single) or when a number has only one possible place (Hidden Single), it can be asserted as belonging to the solution.

One key to the solution is, it does not have to be built in ascending (or descending) order; it can be built piecewise, with pieces starting from different givens.

As in the Sudoku case, the resolution of harder Hidato or Numbrix puzzles requires the use of more complex techniques - in particular of various types of chain patterns.