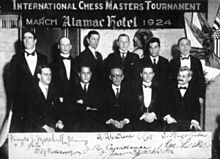 photo of the players

New York 1924 was an elite chess tournament held in the Alamac Hotel in New York City from March 6 to April 18, 1924. It was organized by the Manhattan Chess Club. The competitors included world champion José Raúl Capablanca and his predecessor Emanuel Lasker. Nine other top players from Europe and America were also invited. Emanuel Lasker met Alexander Alekhine, Efim Bogoljubow, Géza Maróczy, Richard Réti, Savielly Tartakower and Frederick Yates in Hamburg. They steamed with the SS Cleveland on February 28, 1924, and joined Capablanca, Frank Marshall, Dawid Janowski and Edward Lasker in New York. The tournament was played as a double round robin, with each player meeting every other one twice. Emanuel Lasker got $1500 for his first prize, generous payment for expenses and still complained. Capablanca gained $1000, compensation for costs and an extra fee.

The final results and standings: