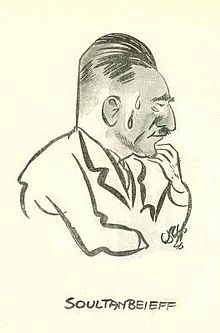 Born in Yekaterinoslav (Ukraine, then Russian Empire), Soultanbéieff learned to play chess rather late, but he improved fast. In 1914 he won the city championship. In World War I, he fought in the Russian army. In 1918 he won the city championship again. After the Bolshevik Revolution, in 1920, he moved to Gallipoli with the army of Pyotr Nikolayevich Wrangel. At the end of 1921 he sought asylum in Belgium. After a short stay in Brussels he moved to Liege, where he would stay for the rest of his life.

In 1923 he participated for the first time in the Belgian Chess Championship, a championship which he would win 5 times; in 1932 (jointly with Boruch Israel Dyner), 1934, 1943, 1957, and 1961. In 1923 he finished 4th, but impressed with his play. He had to combine chess with his work, which resulted in a low number of international tournaments and sometimes bad playing conditions. Nevertheless he participated in some important tournaments like Hastings International Chess Congress and the Hoogovens tournament.

Soultanbéieff was made a national master in 1931 and International Arbiter in 1964.

Soultanbéieff was known for his aggressive playing style, which sometimes resulted in short, brilliant games, but which sometimes led to unnecessary defeat. Some of his games are still famous like his games against Liubarski, 1928 or Borodin, 1943. Unlike many other players, Soultanbéieff stayed true to his attacking style when he grew old. He left his name to the Soultanbeieff Variation, a line in the Slav Defense which was introduced in the correspondence game Macht-Soultanbéieff, 1931-2: 1.d4 d5 2.c4 c6 3.Nf3 Nf6 4.Nc3 dxc4 5.a4 e6.

Due to his professional activities, international tournaments were rare. Nevertheless he achieved some remarkable results, which are contained in the following table:

Being one of the best Belgian players of his time, he represented Belgium on various occasions, notably on the 1933 Chess Olympiad in Folkestone. Playing on 1st board, he achieved 4/14, including a victory over Savielly Tartakower.

Soultanbéieff was a gifted correspondence player too, although again, his professional activities left not much time for this. He started playing correspondence chess tournaments when he was still in Russia. He became first a member, later an honorary member of the EB/BS. He played 1st board for Belgium I in the first correspondence chess Olympiad, scoring 3/6. Another notable result was a drawn match against Aleksandras Machtas, future champion of Lithuania.

Like many chess players, Soultanbéieff also wrote about chess. He wrote a chess column for various local newspapers and collaborated with many outstanding chess periodicals like Shakmati Listock (later Shakhmaty v SSSR), l'Échiquier Belge and Échec et Mat. He wrote a book on the world championship match between José Raúl Capablanca and Alexander Alekhine, which appeared in 1929, published by l'Échiquier editions. He commented the games of the Ostend 1936 tournament for the tournament book and published a collection of his own games under the title Guide pratique du jeu des combinaisons, which was later reprinted as le Maître de l'attaque.