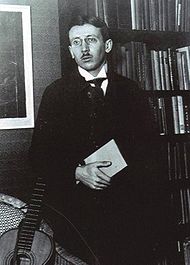 He died in the western front, as a field doctor of the Red Cross, at the end of World War I.