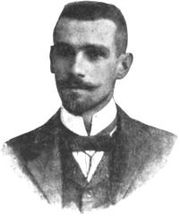 Augustin Neumann won at Coburg 1904, after a playoff against Milan Vidmar (14th DSB-Congress, Hauptturnier A), which earned him the master title of the German Chess Federation. Neumann tied for 4-6th at Barmen 1905 (B tourn, Leo Fleischmann won); and tied for 7-9th at Vienna 1905 (Schlechter won).