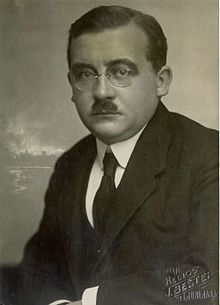 Milan Vidmar (22 June 1885 - 9 October 1962) was a Slovene electrical engineer, chess player, chess theorist, philosopher, and writer. He was a specialist in power transformers and transmission of electric current.

He was born in a middle-class family in Ljubljana, Austria-Hungary (now in Slovenia). He began to study mechanical engineering in 1902, and he graduated in 1907 at the University of Vienna. He got his doctor's degree in 1911 from the Technical faculty in Vienna. The study of electrical engineering at the Technical faculty did not begin until 1904, so Vidmar had to take special examinations in the field basics. He was a professor at the University of Ljubljana, a member of the Slovene Academy of Arts and Sciences, and the founder of the Faculty of Electrical Engineering. Between 1928 and 1929 he was the 10th Chancellor of the University of Ljubljana. In 1948 he established the Institute of Electrotechnics that now bears his name.

Vidmar was also a top-class chess player, probably one of the best half dozen players in the world from 1911 to 1929, all the while remaining an amateur. He was awarded the Grandmaster title in 1950.

His successes include high places at some of the top chess tournaments of his time, e.g. sixth at Carlsbad 1907, third at Prague 1908, first at Gothenburg 1909 (the 7th Nordic Chess Championship), second at San Sebastián 1911 with Akiba Rubinstein behind José Raúl Capablanca, first at Budapest 1912, second at Mannheim 1914, first at Vienna and Berlin in 1918, second at Košice 1928, third at London 1922, shared first with Alexander Alekhine at Hastings 1925/26, third at Semmering 1926, fourth at New York 1927, fourth at London 1927, shared fifth at Carlsbad 1929, tied for 4-7th at Bled 1931, tied for 3-6th at Stuttgart 1939, second behind Max Euwe at Budapest 1940, first at Basel 1952. The Slovene Chess Federation organizes an international chess grandmaster tournament named the Milan Vidmar memorial. Vidmar became an arbiter, and was chief referee for the 1948 World Chess Championship in The Hague/Moscow.

His younger brother, Josip Vidmar, was an influential Slovenian literary critic and public intellectual; his son, Milan Vidmar, Jr. was an International Master of chess.