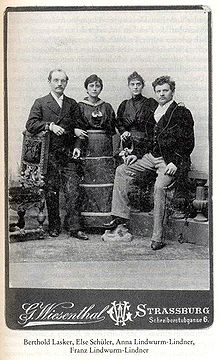 Born Jonathan Berthold Lasker, he was married to the poet and playwright Else Lasker-Schüler and was an elder brother of Emanuel Lasker.

He spent most of his life in Berlin, where he played in local tournaments. In 1881 he shared 1st with Siegbert Tarrasch, and took 2nd, behind Curt von Bardeleben, there. In 1883, he tied for 1st-4th and took 4th (playoff) - Hermann von Gottschall won. In 1887, he tied for 5-6th (Max Harmonist won).

He and his brother, Emanuel, wrote a drama called "Days of Mankind". It contained deep philosophical symbolism, and the theme was "redemption for rationalists and rigid logic truth through the emotional powers of mysticism."