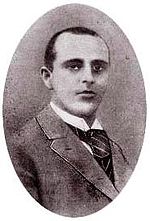 Max Harmonist (Berlin, 10 February 1864-16 October 1907) was a leading German chess master. He was probably the only famous chess player to have been by profession a ballet dancer. He often performed in the royal ballet.

He became famous after winning a game at Frankfurt 1887 against Isidor Gunsberg, widely regarded as one of the strongest masters of that period. In the same tournament he also beat Joseph Blackburne (who placed 2nd) and Emil Schallopp.