The Tarot pack was invented in the early fifteenth century in northern Italy. It was created by adding cards to the existing 52 card Italian suited pack. There seems to have been some experimentation with different formats in the first few years, but eventually the standard came to be a 78 card pack which in addition to the original 52 cards contained an extra court card in each suit, a sequence of 21 new cards which were to perform the then new role of being trumps, and a special card known as the fool.

The original Tarot playing centres were Ferrara, Milan and Bologna, from where the game soon spread to Florence, and later throughout Italy and to Switzerland and France, and then by the mid eighteenth century to most of central and northern continental Europe. In the late eighteenth century Germany, the Austrian empire and the northern European countries went over to the French suited version of the Tarot pack, and France followed them at the start of the twentieth, leaving Italian suited cards current only in Switzerland and in Italy itself.

For a survey of the history of Tarot cards from their invention to the present day, the best reference is Le Tarot Révélé ('The Tarot Revealed') (Swiss Museum of Games, 2013) by Thierry Depaulis (French language with numerous illustrations). This can be obtained from the online shop of the Musée Français de la Carte à Jouer.

Several different types of Italian suited Tarot cards survived into the nineteenth and twentieth centuries. These are listed below, with an indication of their composition, where they are or were used, and the games that are played with them. Further information will be found in the country pages for Italy and Swizerland, and on the Tarot games page.

Tarocco Piemontese
Used in Piemonte for several games, such as Piedicavallo Tarocchi, this pack has the same composition as the Tarot de Marseilles, except that the highest trump is the angel (l'angelo), numbered 20, and the second highest trump is the world (il mondo), numbered 21. The remaining trumps continue 19, 18, etc. with arabic numerals and labelled with the Italian equivalent of the French subjects, except that the 16 is labelled "La Torre" (tower). The fool, labelled "Il matto", is numbered 0 even though it is not a trump.

Tarocco Bolognese
This is a 62 card pack, sometimes known as Tarocchino, whose composition and basic design goes back to the early days of Tarot. The top 4 of the 21 trumps have no number or label - they are the angel, world, sun and moon. Then come numbered trumps depicting the star (16), thunderbolt (15), devil (14), death (13), traitor (12), old man (11), wheel (10), strength (9), justice (8), temperance (7), chariot (6) and love (5). Below this are the four moors (equal in rank) and the bégato, which again are unnumbered and unlabelled. The matto is a jester playing a drum. Each suit has 10 cards: king, queen, cavalier, jack, 10-6 and ace. This pack is used in and around Bologna to play Ottocento and some other related games. 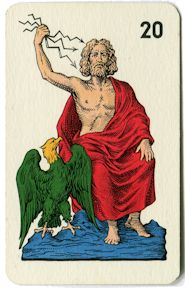 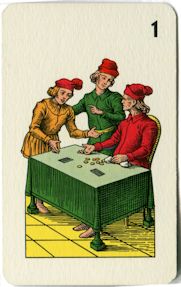 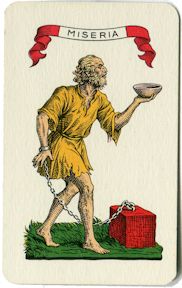 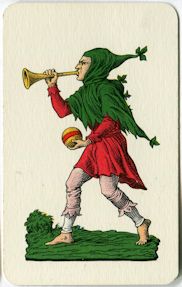 Tarocco Siliciano
This is used for different games in several villages in Sicily. Details can be found in volume 1 of A History of Games Played with the Tarot Pack by Michael Dummett and John McLeod (Edwin Mellen Press 2004), and in Italian in Michael Dummett's book I tarocchi siciliani (2nd ed. il melangolo, 2002) and on the web site of L’Associazione Gioco Tarocchi Siciliani – Michael Dummett, which is dedicated to promoting the Sicilian game. As sold the pack has 64 cards - 21 trumps, the fool, and king, queen, cavalier, jack and 10-5 in three suits, but with a four and ace added to the coin suit. In most games the ace of coins is not used, but it is included in the pack to carry the tax stamp. The trumps except for the lowest are labelled with Arabic numbers. They are Jupiter (20), Atlas (19), sun (18), moon (17), star (16), tower (15), ship (14), death (13), hermit (12), hanged man (11), wheel of fortune (10), chariot (9), love (8), justice (7), fortitude (6), temperance (5), constancy (4), emperor (3), empress (2), "picciotti" or "bagotti" (1). Below the 1 is an unnumered trump labelled "miseria" (destitution) and showing a beggar. The matto is a jester blowing a horn.

Minchiate
Also known as Germini, this game played with 97 cards had died out by the middle of the 20th century. There is however a group of players in Florence, the Accademici de’ Germini, who are dedicated to reviving it. The packs have 40 trumps instead of the usual 21, the 12 signs of the zodiac and some extra virtues being inserted. The top five trumps (called arie) are unnumbered - they are the trumpets, the world, the sun, the moon and the star in that order. The remaining trumps carry roman numerals from XXXV down to I.

The Italian site tretre.it includes some articles on the early history of tarot cards within its History of Playing-Cards section, and also a library - Biblioteca del tre - with reproductions of several early Italian descriptions of Tarot games.

At the site trionfi.com a group of researchers is collecting and publishing information and theories about the origin and early uses of Tarot cards, up to 1465.

The nature of the images on the Tarot trumps have led people to read occult meanings into the cards. This practice goes back to the 18th century. Although the first known Tarot fortune tellers were from Bologna (and used the Bolognese pack), the currently popular mystical interpretations of the cards originated in France in the last quarter of the 18th century, and use the Tarot de Marseilles and packs derived from it.

Since the 1780's, and especially in the twentieth century, numerous new Tarot packs have been designed explicitly for occult use. Though they all derive ultimately from the Tarot de Marseilles, often the names of the cards and the suits have been altered to fit the theories of occultists and to make them sound more mysterious. For example:

Further information about the occult Tarot can be found in this Tarot FAQ by Glenn Wright (who formerly published under the pseudonym Jess Karlin).