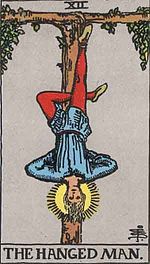 The Hanged Man (XII) is the twelfth trump or Major Arcana card in most traditional Tarot decks. It is used in game playing as well as in divination.

It depicts a pittura infamante (pronounced ), a shameful image of a traitor being punished in a manner common at the time for traitors in Italy. Some versions portray Judas, and include the bags of silver in his hands.

A 1393 decree for Milan and Lombardy of the punishment for traitors: “Let him be drug on a [wooden] plank at a horse’s tail to the place of execution, and there be suspended by one foot to the gallows, and be left there until he is dead. As long as he lives let him be given food and drink.”

Modern versions of the tarot deck depict a man hanging upside-down by one foot. The figure is most often suspended from a wooden beam (as in a cross or gallows) or a tree. Ambiguity results from the fact that the card itself may be viewed inverted.

In his book The Pictorial Key to the Tarot, A. E. Waite, the designer of the Rider-Waite tarot deck, wrote of the symbol:

The gallows from which he is suspended forms a Tau cross, while the figure - from the position of the legs - forms a fylfot cross. There is a nimbus about the head of the seeming martyr. It should be noted (1) that the tree of sacrifice is living wood, with leaves thereon; (2) that the face expresses deep entrancement, not suffering; (3) that the figure, as a whole, suggests life in suspension, but life and not death. [...] It has been called falsely a card of martyrdom, a card of prudence, a card of the Great Work, a card of duty [...] I will say very simply on my own part that it expresses the relation, in one of its aspects, between the Divine and the Universe. 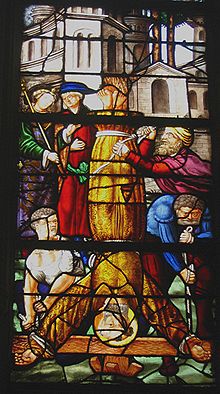 The Cross of St. Peter is shown in this French stained glass window. Saint Peter is conventionally shown as having been crucified upside-down.