Ulti or Ultimó, is Hungary's national trick-taking card game for three players. It is virtually unknown outside its home borders.

Its name derives from the winning of the last trick with the lowest trump, a feature derived from several games like Trappola and Tapp Tarock played in Central Europe and in the former Austro-Hungarian empire, though the game as a whole must have grown naturally out of the Czech Mariaš, first mentioned in Hungary in 1787 and first described in 1883, as suggested by its alternative title Talonmariaš, described as "ultimáriás" by G. J. Potter in 1930. All games ultimately deriving from the old French game Marriage.

It is important to note that the rules of the game are not universal, and typically every group of players will have their own set of rules that they agree upon. When people play together for the first time, it often takes considerable amount of time until they can agree on rule set they play. Some rules can significantly alter the strategy (See reference for a different set of rules from what is described below).

Each game starts with an auction. The highest bidder becomes the soloist and plays alone against the other two with an objective to fulfill whatever contract he bid. In trump games, Aces and Tens captured in tricks worth 10 points each, and winning the last trick is worth a further 10, making a possible total of 90. In addition, declaring a marriage (King and Over of the same suit) scores 20, or 40 in trumps, bringing the maximum possible total to 190. In no-trump contracts card-points and marriages do not count, and cards rank A K O U 10 9 8 7.

All bids have a form of two distinct bids  - for trump games a single value bid where the trump is either Acorns, Bells or Leaves (but is not announced during the auction) and a double value bid where the trump is Hearts. In the latter case the suffix "of Hearts" is appended to the bid. The suit of Hearts itself bears no other distinction in the game, however, by naming the trump during the auction the player gives away information and is thus slightly disadvantaged.

In no-trump games such as Betli or Plain Durchmars the double value form of the bid is merely an identical, second stage which helps the auction keep going for higher bids.

Betli and Durchmars also have an additional form called Open. When playing an Open bid all players put their cards on the table and show it to the others right after the first trick. Professional players usually end the game after "opening", as they inspect the hands and conclude whether the calling player would win or lose the game. Open bids are worth quadruple the base value of Betli and Plain Durchmars, and double in Trump Durchmars. 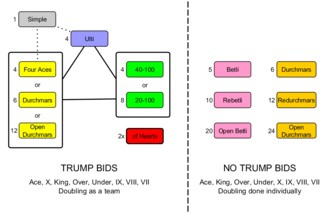 Bids can be freely combined as long as they make sense, as shown on the figure. The value of a combined bid is the sum of the individual components' values. It is important to note, though, that at the conclusion of the game the constituent bets are evaluated and scored independently. A 40-100 Durchmars Ulti therefore nets 4+6+4=14 points if all undertakings succeed and 4−6+4=2 points if the Durchmars happens to fail. Doubling is done component by component as well, meaning that if a defender successfully doubles Durchmars in the above example the net result of the round is 4−12+4=−4 points.

Ulti is a unique bid in the sense that it carries an additional 4 points penalty if lost (8 for Ulti of Hearts). Doubling, however, doesn't affect the penalty so a doubled and lost Ulti of Acorns costs 8+4 points for the bidder (16+4 or 32+4 if redoubled or surdoubled).

Ulti and Four Aces are worth an extra point (2 in Hearts) besides their standard value if they were not combined with any other bids as they implicitly get combined with a Simple. Therefore, the soloist should attempt to complete an extra objective in this case: to score more than the defending team. However, since the constituent bets are handled independently, failing to complete the Simple does not cause the soloist to lose the bet but his winnings will be reduced by the value of a Simple. The Simple component, like any component in any bid can be doubled separately.

Usually a player who bids a single value (non-Hearts) Simple forfeits the game doubled if no higher bid is made by anyone including himself. This is done to prevent opponents from completing silent bids and to speed up the game playing more valuable bids. In certain circles, forfeiting a simple is not optional but done by convention.

In the auction a bid is ranked above another bid if its total value is either higher than the other bid's, or is equal but made up of less components. An Ulti (4+1 points) thus can be declared over a 40-100 (4 points) and a Betli (5 points) can be declared over an Ulti. There is a single exception to this rule: although having the same total value and number of components, Ulti of Hearts and Four Aces of Hearts can be overbid by 40-100 Durchmars or Ulti Durchmars to facilitate playing more of these infrequent but arguably more exciting bids.

The following table recites all 54 possible bids in ascending order of value and precedence. Alternating row colors represent increments in the 35-step bidding ladder as there are many combinations of equal value which can not be bid over one another.

The name Rebetli and Betli of Hearts are both commonly used, however, the latter suggests a trump suit despite Betli being a no-trump bet. The misleading suffix merely points to the fact that the bet is double value and its use is advised against.

The auction is conducted in an unusual way which is virtually unique to Ulti. The player on the right of the dealer gets two extra cards. He is obliged to select two cards from his hand, place them face down on the table without showing them, and make a bid.

Thereafter, each player may pass or else pick up the talon and bid. Passing does not prevent the calling player from bidding again. The calling player may pick up the talon again if the other two players pass. A player who takes the talon must make a higher bid than the previous one, then lay any two cards face down on the table to re-form the talon. This continues until all players pass, after which the calling player announces the trump unless the game is "plain" or "Hearts", and the other two players become the defending team. All doubling takes place after the end of bidding and before the end of the first trick.

In a specific variation of the game, bidding takes place in two rounds. In the first round, each player gets five cards. The player on the right of the dealer bids first with all other players entitled to bid, counter-clockwise. They should either pass or announce a higher bid, keeping in mind that the value of all bids (and doubles) is twice as high in the first round as normally. Whichever player wins the first-round auction gets two extra cards from the dealer, then each player - beginning from the player on the right of the dealer - gets five more cards. The player who won the first round of the auction selects two cards and places them face down, confirming their first-round bid or raising it, but with the same trump suit. After this, bidding continues like in the normal game.

It should be stressed that in this version the winning bid from the first round (including its value) remains valid in the second round, until someone else (or the caller herself) announces a higher bid.

Doubling takes place at the beginning of the game, after the bidding is over. Only the team opposed to the team which doubled the last time can call a double, which may go on infinitely. If no doubling has taken place yet, only the defending team can initiate it. Below are the list of the most common doubles.

Note that it is very uncommon for a doubling to go higher than redouble, and therefore certain high level doubles such as "Fedák Sári" and "Wheeled Bicycle" have names spontaneously invented by the players which later became famous. The doubling can go higher than 128, but in this case doubles don't have fixed names, and in the very rare case the doubling goes this high, players use any imaginary name which first comes to their minds as the name for the double.

The calling player leads to the first trick, and the winner of each trick leads to the next. Suit must be followed, and if possible, the played card must be of higher value than what it is in the current trick. If following the suit is not possible, trump must be played. If neither playing the lead suit, nor playing trump is possible, any card may be played. The player who plays the highest card (any trump is higher than any card of any other suit) wins the trick and leads the next trick.

In a trump game, any player having a marriage to declare must do so upon playing to the first trick, or the marriage cannot be claimed later. All marriages called by the defending team count towards their collective score. In a hundred-game, the calling player may declare only the marriage whose value he stated when bidding.

In an Ulti game, the calling player may not lead or play the trump Seven before the last trick, unless forced by the rules of play.

In Hungary, the game is usually played with real bets, but because the smallest value coin is 5 forints, the game is played with a unit of 10 forints per point. In this case, points are not kept on paper, instead, money is paid after each game.