A trick deck usually refers to a deck of playing cards which has been altered in some way to allow magicians to perform certain card tricks where sleight of hand would be too difficult or too impractical. These decks can be bought from most magic dealers. One disadvantage of decks is that they are highly noticeable.

Unlike the Invisible or Svengali Deck, the Stripper Deck can be handled by an audience member unfamiliar with the concept and can withstand a modest amount of scrutiny without exposing the secret; however, this deck is found in a number of beginners' magic kits, so the secret is well-known, even among non-magicians.

The cards of a Stripper Deck are slightly tapered, so that the sides no longer form a perfect rectangle. The change is slight enough to be undetected by visual inspection or even casual handling, but if a single card is rotated 180° so that it's tapered in the opposite direction from the rest of the deck, the card's broad end can easily be detected, by feel or even by sight, among the narrow ends of the rest of the deck. At this point the magician can select the target card through sleight of hand.

Many of the effects achieved with a Stripper Deck can also be accomplished with sleight of hand. 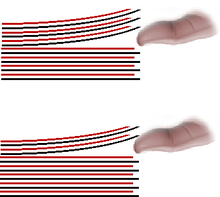 The deck can be dribbled or riffled to create the illusion that the deck is completely ordinary. It can even be shuffled. One basic trick involves a spectator choosing a card from the deck and returning it; the card can then appear practically anywhere in the deck, making tricks like the Ambitious card incredibly simple. The final and most stunning trick is when all the cards are suddenly presented as being all the same as the initially chosen card.

Joe Stuthard's Trilby and Bi-Co Trilby Decks are variations on this deck. In the 1960s and 1970s, Marshall Brodien sold 17 million Svengali decks under the name TV Magic Cards.

While the Svengali Deck allows for the easy performance of seemingly complex tricks, the conjurer cannot allow an audience member to examine the deck. The use of a Svengali Deck can also be detected by its characteristic faster riffle and sound. Finally, because the deck is widely sold in joke and novelty shops, many laypeople are familiar with it.

A Marked deck has a subtle mark on the decorative side of the cards. Usually the mark is placed in a certain position to indicate the number of the card, with the color or shape of the mark indicating suit. The magician shows the card to the audience and reads off the number and suit of the card without seeing it, indicating 'x-ray vision'. This principle is derived from similar card marking techniques used to cheat at gambling. The cards of a marked deck may be marked in a number of ways. They may be manufactured with subtle variations in the back pattern. They may be marked by the user with tiny punctures or dots, or a barely detectable change of the tint of the cardstock or pattern. They may even be marked 'live', while in use either with a sharpened finger nail or a tool (often a ring known as a "poker ring") made specifically for that purpose.

These decks are used to force a spectator to select a particular card, which the magician already knows in advance. Such a feat can be accomplished using a regular deck and sleight of hand but with the aid of a forcing deck the trick is made self-working. The simplest forcing Deck is called "one-way". In a one-way deck all cards are identical (with the possible exception of one or two at the top and bottom of the deck). When using this deck, the magician must be careful to prevent the spectator from seeing the faces of the cards. The above-mentioned Svengali Deck is another sort of forcing deck, making it extremely easy to force the choice of one of the twenty-six short cards (which are all identical) in the deck.

It's worth noting that these decks have fallen out of favor amongst professional magicians because of an increased suspicion amongst audiences regarding the use of gimmick props. Thus, they are rarely employed.

With a Rising Card Deck, the spectator chooses a card and puts it back in the deck of cards. Then, the chosen card magically rises, whether it is in the box, in the hands, on a surface, or even in a wine glass.

The construction of these decks varies. The simplest of these, often described in amateur magic books, involves cutting a hole in the back of the carton so that the performer can surreptitiously push up the top card with their finger. More complex arrangements include a pair of cards gimmicked with an elastic band onto which the target card can be pushed (between the gimmicked pair), or a deck with a fine black thread passed across the top onto which the target card can be pressed down. There are without a doubt more complex and clever arrangements in use.

The Invisible Deck is one of the best known card tricks. The trick's title stems from the classic presentation of this effect, in which the magician hands the spectator an imaginary, or "invisible" deck. On being handed the deck, the spectator is asked to mime the acts of removing the cards from their case, shuffling them, spreading them face-up on the table, freely selecting a card, replacing it face-down among the other face-up cards, and returning the deck to its box.

In the more comedic version of the routine, more focus will be drawn to the part of the effect where the spectator is handling the cards. Often, the magician might criticize the spectator's card-handling abilities, or remind them to take the cards out of the case before trying to shuffle them.

A more serious routine can be performed, which focuses more on the magician's mindreading abilities and the fact that the spectator had a completely free choice of card. The magician could hand the spectator a box of cards to hold, ask them to think of, and concentrate on, any card in the deck, and then to name it. The spectator then hands the box back to the magician and the trick completed as before.

Joe Berg created the Invisible Deck in the 1930s, originally calling it the Ultra Mental Deck. It was Eddie Fields who came up with the invisible presentation after watching a patient in a psychiatric unit of a hospital shuffling an imaginary deck of cards.

The deck can be bought from magic dealers, and it requires some memorization work on the part of the performer. It is also possible to construct the deck using a regular deck and additional materials from department stores.

This is a lesser-known deck which operates on a principle similar to that of the Invisible Deck. A selection is given, and the magician pulls out a deck of cards and fans it face down. He spreads through the deck until he reaches a face-up card, this is the spectator's selection. For a final kicker the magician explains that he really did know which card would be selected, and that he had not secretly turned it over, by showing that the selected card has a different back than the rest of the deck. An inverse handling of the Brainwave deck is the X Deck, originally invented by Jay Sankey and identical to the Invisible Deck, but with the odd cards having an X on them. Both decks are meant to show that the magician did not just secretly turn the cards over.

The following is not a trick deck per se, but the cards it contains can be combined with a normal deck (or a packet of cards from a regular deck) in order to perform specific tricks.

A gaff deck is a deck that is used in conjunction with a normal deck. The gaff deck has the same back as the normal deck of cards, but the faces are changed visually. For example, there might be two 3½ of clubs, which can be used to split a 7 of clubs into two cards.

There are many ways to order a deck so that the magician can perform special tricks. It is possible to use a stack, or ordered deck, to determine what card the spectator cut to. A popular stack to use for this is a Si Stebbins Stack. To make one, all a magician needs to do is order the cards so that each card is three values greater than the previous card, and so that the suits cycle consistently. For example: A♥, 4♣, 7♦, 10♠, K♥, 3♣, etc. The simplest way to use a Si Stebbins Stack is to let the spectator cut and replace the cards and look at the top card. They then replace the card on top and the magician takes the deck and peeks at the bottom card. Now, using the sequence of the Si Stebbins Stack, the magician adds three to the card value they peeked, and cycles one suit. Now they can continue the trick as usual. The Si Stebbins Stack also allows for more complex mind reading techniques using additional mathematical principles.