Tarneeb (Arabic: طرنيب‎, literally meaning trump, translit: ṭarnīb, also spelled Tarnibe and Tarnib and called hakam Arabic: حكم‎ in the Persian Gulf region, the Arabic word for "trump"), is a popular plain trick-taking card game played in various middle eastern countries, most notably in the countries of the Levant and also in Tanzania. The game may be considered a variation of Whist, or a version of Spades.

Tarneeb was probably inspired by many other Arabic card games, though many different nations throughout the Middle East claim that Tarneeb was created in their respective countries. Historically Tarneeb can be traced back to Bla'd Al Sham, more specifically Syria, Lebanon, Jordan, and Palestine, however the game seems to have truly flourished only from the early 18th century on.

The aim of tarneeb is to win a set of continuous hands. There are four players in partnerships of two teams. A standard 52 card deck is used, each suit ranking in the usual way from Ace (high) down to two (low). The game is played in a counterclockwise fashion. The teams stay together for all the games of a set. In tarneeb tournament, at the end of a set, the losing team is replaced for the next set.

The two members of each team are seated across each other, often on a table in such a way that no player can see the cards of other players (see seating charting image). Either player of a team may collect the winning tricks. 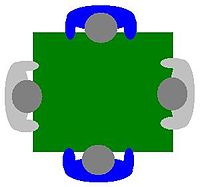 The bidding begins with the first player to the right of the dealer and continues counter-clockwise. It consists of a number of tricks seven or above. A bid of more tricks outranks any bid of fewer tricks.

Each person can bid only once, eliminating the option for a player to raise their bid. In addition, the dealer, who bids last, has the option to match, rather than raise the highest bid.

Once all thirteen tricks are played, the scores of the two sides are calculated by adding the tricks each side has won. If the declarer team meets or exceed the number of bidded tricks, then they get the number of tricks they have, otherwise, they lose the bid number (subtracted from their score) and the opposing team gains the number of tricks that they have collected their own in score. It is possible, therefore, to have a negative score at some point. The set ends when one of the teams reaches thirty-one (31) and the losing team is replaced for the next set.

A team can win a game by bidding for 13 tricks, but they have to declare it at the bidding time by calling for a "game" (بالدق).