Tam cúc (三菊, "three chrysanthemums") is a multi-trick card game popular in North Vietnam. Tam Cuc not just play for entertainment, but also play in ceremonies and festivals. It a card game that is commonly played in New Year celebrations, it a habit of northerner to play this game while wait for the banh chung to cook. Tam cúc is mostly played by women because the number of cards is less than in the Tổ tôm, which is more common among men. 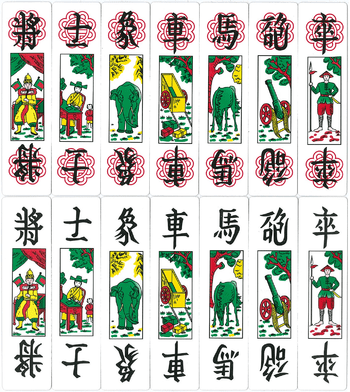 A deck of tam cúc has 32 cards with 2 kinds of set red and black. Each set has 1 general (tướng 将), advisors (sĩ 士), 2 elephants (tượng 像), 2 chariots (xe 車), 2 cannons (pháo 砲), 2 horses (mã 馬), and 5 soldiers (chốt 卒). The black side general is called tướng bà, and red side is called tướng ông.Red side soldiers are called sĩ điều. The rest of the cards are addressed by their name and color. The deck of the tam cúc is similar to Chinese chess pieces.

The Tam Cuc deck is divided from high to low in rank as follows:

The red suit is worth more than black of same rank.

Combinations of the hand:

4 soldier cards of the same color.

5 soldier cards of the same color.

Tam Cuc can be played with 4, 3, or 2 players. When played with three players one red soldier and one black soldier will not be used, or a total of five cards are discarded: the two generals, both of red and black intellectuals, and 1 red soldier and 1 black soldier. At first one-person will shuffle the deck of card and another will play as the House. The way to become the House is that players will each call out the name of the card general, intellectuals, elephant, cart, gun, horse, and soldier and the card will be deal until the called get the card that they called and become the House. The following house will be establishing the person on the right of the previous House. The House allows dealing the card and goes first. The deck of card is deal out until the end. The house will lay down the cards first and called out for how many card going he be play single card, two cards, or three cards. The following person will lay down the number of card the same as the number being called out face down. When all the players placed down there cards, starting with the house each player will flip their cards up and the one with the highest hand will become the House and the process starts again until end. An exception is that every player allows accept defeated and hides their hand to keep their cards secret. All played cards get collected and discarded as trash.

Tam Cuc is a common game among the people. It has become a trademark for New Years and other large festivals or celebrations so many famous Vietnamese poets and writer had talk about this game in their work. The famous poet Hoàng Cầm wrote in his poem “Cây Tam Cúc”: