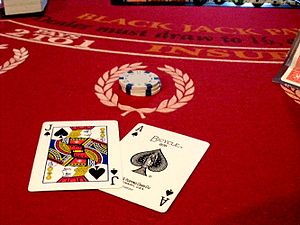 Pontoon, a hand consisting of an Ace and a card worth 10 points

Pontoon is a name shared by two distinct card games, both BlackJack variants. For those in Australia, Malaysia and Singapore, Pontoon is a card game similar to MatchPlay 21 or Spanish 21, while in the UK, a game of Pontoon holds closer to the traditional BlackJack rules, but can be quickly distinguished by the verbal usage of the terms "twist" and "stick".

The British BlackJack variant called Pontoon is played in the UK and Commonwealth with single 52-card decks. British Pontoon uses the terms "twist" (hit), "stick" (stand) and "buy" (double the bet, not to be confused with doubling down) and a different set of rules. The rules for buying in Pontoon include allowing the player to buy on any hand of 2 to 4 cards, allowing the player to twist after he buys.

The remainder of this article refers to the Malaysian version of Pontoon.

Pontoon is the British or domestic version of Blackjack, which in turn is the American version of Vingt-et-un (French for Twenty-one), a French gambling game popular at the court of Louis XV and later, much favoured by Napoleon, especially at St. Helena. In the twentieth century it became the most popular game of the armed forces of English-speaking nations. Pontoon, unlike casino Blackjack, has no official rules and varies widely from school to school.

Pontoon is an arithmetical game played on a table with the same layout as blackjack. In each deal, the player's aim is to receive cards totalling more in face value than the banker's, but not exceeding 21, otherwise he is "bust" and loses. A 21 consisting of an Ace and a card worth 10 is a pontoon, and pays extra. A player's 21 or pontoon always beats a dealer 21 or pontoon. Like Spanish 21, it is played from either a shoe or a 4-deck continuous shuffling machine (CSM). The shoe games use six or eight Spanish decks, which are regular 52-card decks, minus the ten-spot cards. Cards Two to Nine count 2 to 9 respectively, courts 10 each, Aces 1 or 11, depending on what is better for the hand.

Pontoon has similar rules to Spanish 21, with some notable differences, listed below.

Despite the player disadvantage of rules 2-9, on average, the house edges for Pontoon are lower than for Spanish 21, because rule 1 is so profoundly player advantageous. The rule differences mean that there are several significant strategy differences between Spanish 21 and Pontoon.

Because Pontoon has an element of player choice, players can reduce the casino advantage to less than 0.5% (with the exception of Adelaide, with house edge 0.62%), by playing optimally. The complete set of optimal plays is known as basic strategy, and is highly dependent on the rules. The computer-generated Pontoon basic strategy and house edge tables below are reproduced from The Pro's Guide to Spanish 21 and Australian Pontoon, with permission of the author, Katarina Walker. Pontoon strategy is far more difficult than Blackjack, however, casinos do not generally object to people using strategy charts at the table.

Pontoon strategy is very similar to Spanish 21 strategy, but there are some crucial differences, mainly due to the no-hole-card rule, and the limitations on soft doubling.

Pontoon does, on average, have a lower house edge than its American counterparts because of the no-hole-card rule, which means that you are paid out immediately for your winnings on any total of 21, regardless of whether the dealer ends up with a natural (a Blackjack). It is too late for the dealer - he has already paid you out. In the US, a dealer Blackjack terminates the game, forgoing the opportunity for you to draw to 21 and win. You lose all your bets unless you also have a natural, in which you get paid 3 to 2.

Moreover, the VIP rooms in Australian casinos offer far better Pontoon table conditions than the Spanish 21 games in American casinos.Pontoon in Australia was comparable in popularity to Blackjack, so there are more Pontoon tables available in Australian casinos than Spanish 21 tables in American casinos. Unfortunately, in response to the release of the book "The Pro's Guide To Spanish 21 and Australian Pontoon" by Katarina Walker, Burswood Casino in Perth has withdrawn the game from the main floor and Crown Casino, Melbourne, have withdrawn the game from their VIP Mahogany Room and introduced continuous shuffling machines to some of the Pontoon games in the main hall. Any hand-shuffled or automatically shuffled Pontoon games at Crown Casino have penetrations below 75%, rendering the game far less profitable than in the past. There are still opportunities to get high win rates in the Endeavour VIP Room in Star City, Sydney, and the main floor at the Hobart casino. Lasseter's Alice Springs and Country Club Casino in Launceston offer the game on the weekends, but the table limits are very low, ranging from $5 to $200 or $250 per box. Adelaide offers Pontoon in the main hall, but the Adelaide rules give the highest house edge of any Pontoon game in Australia at over 0.5%. Nevertheless, it is still lower than the Blackjack house edge, which exceeds 0.7%, offered on the main floor of the Adelaide casino. A Blackjack game, hand-shuffled, with slightly more player-advantageous rules in offered in the Adelaide VIP room, with table limits conducive to serious betting. Cairns offers a six-deck Pontoon game with a competitive house edge on the main floor but it gets crowded and has a $400 or $500 table limit, so it does not reap a profitable game. At the end of the day, the best Pontoon house edge in the world is of no use if the table limit is too small for your bankroll, and the table is crowded, especially with slow players. If playing solitary on the table by gives a pro player almost 200 hands an hour, you will be earning five times as much per hour as on a packed table, where you can expect no more than 40 hands an hour, more if you can nab more than one box.

Darwin casino in the Northern territory does not offer Pontoon at all, and Jupiter's on the Gold Coast only offers Pontoon with continuous shuffling machines, which is a pointless activity. Treasury Casino, Brisbane, offers a 6-deck hand-shuffled or automatically shuffled Pontoon game in the VIP room, but the penetration can get as low as 67%, the heat is high, and camouflage is a must, which is costly to your win rate. The comps at Brisbane are not particularly competitive either. It is owned by Tabcorp who "sweat the money", as the saying goes. They do not take the risks that the Packer-owned Crown and Burswood Casinos are willing to take, risks that pay off to the casino shareholders,as well as the highly skilled pro player, providing the casino has the cash reserves to cover freak windfalls. Canberra used to offer the best Pontoon game in the country, a 4-deck game with a tiny house edge of less than 0.3% and great penetration, but they took away their $25 table, then added continuous shuffling machines to their $10 Pontoon table, so Canberra is no longer the Pontoon mecca of Australia, and is not worth a visit by the discerning professional card counter.

The above is a basic strategy table for all Pontoon rule variations, with a few exceptions: if no OBBO/BB+1, hit 11 vs X and A; if no OBBO/BB+1 and no Ace re-splits, hit A-A vs X; if last chance doubling, split 4-4 vs 6.

The following table lists the Pontoon house edges for all known rule sets. The house edge is equivalent to the house advantage over a player who is following the basic strategy tabulated above. (The figures were obtained from 10-billion hand simulations and have a standard error of 0.001%. The super bonus is averaged out to a 100:1 payout.) . (SPL3 = can split three times to form four hands, SPL2 = can split twice to form three hands, SPL1 = can split once only, SPA1 = no Ace resplits, NLC = not last chance doubling, D9 = doubling on 9-11 only)

As all Australian casino Blackjack games have house edges greater than 0.5%, Pontoon is the superior of the two games. In general, casino staff and Blackjack players erroneously believe that Pontoon has a higher house edge than Blackjack, because the removal of the ten-spot cards creates a 2% disadvantage for the player. In Pontoon, the player can draw to "21" and win against a dealer Blackjack; this combined with "not-last-chance" doubling, forfeit, player "21" always wins, player Blackjacks always get paid at 3:2, and bonuses on certain hands, actually overcompensates for the 2% disadvantage. The result is that Pontoon, on average, has about two-thirds the house edge of Australian Blackjack, which due to no surrender, hole card, and limitations on soft doubling, has some of the highest house edges for regular Blackjack in the world.

Federal Pontoon is a version of the Australian casino game Pontoon played in Tasmania, Australia. Both casinos in Tasmania, Country Club Casino, Launceston, and Wrest Point Casino, Hobart, are owned by the Federal Group.

Rules specific to Federal Pontoon are:

In Wrest Point Casino, Federal Pontoon is played in the public area only and is not available in the VIP room.

Rules specific to Jupiters 21 are:

Jupiters 21 is played in the public area of Jupiters Casino only, and not available in the VIP room, Club Conrad. All Pontoon games played in Queensland casinos have the same rules.

Rules specific to Treasury 21 are:

All Pontoon games played in Queensland casinos have the same rules.