Konter a Matt, “Kontra a Matt” or “Konter a Midd” is a Luxembourgish trick-taking card game played by four players.

Players form two teams of two partners with partners sitting at opposite seats. In order to win a match, a team has to get more than 21 points. If each team gets 20 points, the game ends as a draw.

As a consequence, in a match, depending on which suit is the trump, there are nine or eight trumps, four possibilities, the value of the cards is as follows (from highest to lowest, the point value is not affected):

The next rule is the obligation to respond to the suit that has been played or to play a trump. If the player has a card belonging to the suit that is played, they may not play another suit except a trump.

If no trump is played, the suit the player has to respond to, is fixed by the first card that is played. The highest card of this suit wins the draw. The value range is (highest to lowest): A, K, Q, V, 10, and 9.

The person that wins the four cards puts them next to his place face down, paying attention not to mix them with the other cards. Sometimes, it will be necessary to cross check whether somebody played a trump or not.

During a match, more than one game is played - minimum is three. When beginning a match, the person counting will draw the following picture. A player has won a match if all of the stripes have been crossed out. By convention the counter is with the team second row.

There are different ways to win or to lose a game.

First, you may have been the one that has chosen the trump and you lose. Second, the game counts differently according whether Kontra, Matt or Kontra-Matt has been announced. (You must have the cards to announce them.) Kontra or Matt doubles, Kontra and Matt multiples by three. Last, you may win or lose without the other team getting a draw. If the match was won against those who decided the trump, there will be as many stripes added as those that are removed (see below chart), viewed from the counter. If the other team got no draw at all, there will be one more stripe removed, and eventually one more added. 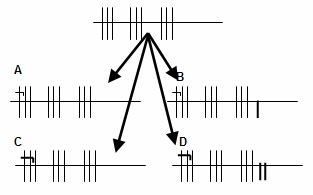 For a draw, no stripes are removed, but the team that fixed the trump will have stripes added, one to three depending on the announcements.

Teams are fixed, the persons sit down according to the team they belong to.

For the next game, the person that fixed the trump will be the dealer.

After a match, the losing team may ask for a “revenge”, a new match with the same team setup. I would consider that the normal way. Otherwise, the team composition is changed.

Konter a Matt strategy is complex. Some high-level considerations are: If the trumps are equally distributed among the players, playing twice a trump may leave none or one trump. If the trumps are out, the aces are the highest cards.

If a team has more than 20 points, they may put the rest of the cards to the table and announce “we have xx”.