The following is a glossary of terms used in the card game blackjack. Besides the terms listed here, there are thousands of common and uncommon poker slang terms. This is not intended to be a formal dictionary; precise usage details and multiple closely related senses are omitted here in favor of concise treatment of the basics.

Being told by a casino that you are being removed due to card counting. 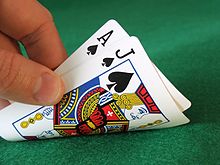 Any counting system which has an exact balance between plus cards and minus cards. In such a system, if the deck were counted down to the bottom, the resulting sum would be zero.

1.  A card game in which players attempt to approach 21 but not exceed it

Having a total over 21, resulting in an automatic loss.

The individual card that brings the hand's total over 21.

A collection of actions that will offer the highest return on investment when you know only your point total and the dealers upcard, basic strategy is set in stone, but may vary when different rules are applied to the game.

A brightly colored plastic card that serves to mark the point where the dealer will reshuffle the deck(s) / shoe, allow the player to cut the deck/shoe prior to dealing, and prevent the bottom card of the deck(s) / shoe from being exposed during play.

double or double down

After seeing his hand, a player can Double by placing an additional bet equal to his original bet and subsequently drawing one and only one additional card. This move may only be used on the first two cards.

The betting spot located to the ~dealers~ left hand side, which is first to receive cards and first to act.

Reaching five cards in one hand without busting; although increasingly uncommon, casinos may offer a 2:1 bonus for achieving it.

Any hand that does not contain an ace presently being counted as 11. Or to put another way, a hand in which there is a chance the player will bust on a hit.

To ask for another card. If that extra card makes the total over 21, then the player busts.

A tie; the player and dealer have hands with the same total.

A device used to hold multiple decks of cards typically 4,6 or 8 prior to the dealer removing them one card at a time to be used during play.

A blackjack game which is dealt from a shoe. Shoe games typically use 4,5,6 or 8 decks.

A soft hand is a hand that includes an ace valued as 11, as opposed to 1.

If a player is dealt two cards of the same rank, he can choose to play each of them separately, putting up a bet for each one.

To stop asking for more cards.

Any hard hand where the possibility to exceed 21 exists by drawing an additional card namely 12,13,14,15 or 16

To surrender is to abandon your hand, while recovering half of your initial bet.

The betting spot located on the dealer's right which is last to act.

The card that the dealer is showing.