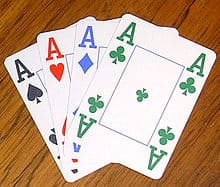 The aces of a four color deck

A four-color deck is identical to the standard French deck except for the color of the suits. In a typical four-color deck, hearts are red and spades are black as usual, but clubs are green and diamonds are blue. However, other color combinations have been used over the centuries.

Four-color decks made for bridge or whist are often called no-revoke decks because they are perceived to reduce the risk of a player accidentally revoking (illegally playing a card of a suit other than that led). Dozens of card manufacturers have developed four-colored suit cards for bridge during the 1900s and continue into this century. S. R. Huntley created many bridge decks, which included his stylized four color pips of black spades, red hearts, orange diamonds and blue clubs. Some of his decks included "forcing" instructions printed on each card for play. In 1947, a deck of playing cards of bridge size, from Forcolar Inc., introduced a deck with black spades, red hearts, green clovers (three-leaved, not the French club shape), and orange diamonds. In 1948, the Avoid Playing Card Company introduced a deck of the same name with black spades, red hearts, orange diamonds and purple clubs.

A four-color deck for poker was developed and publicised by Mike Caro. It was introduced at his World Poker Finals at Foxwoods Resort Casino in 1992. His original design was not a success as the colors were a surprise to players. However, four-color decks have become a somewhat popular option in Internet poker software interfaces since often each player may use their preferred design of playing cards without affecting others' experience, and since visibility is not as good on a small screen as in face-to-face play, especially as many online players play multiple tables simultaneously, with shorter time limits in which to make decisions. Having each suit represented by a different color can allow players to more easily recognize a flush. The US Playing Cards Company made a poker sized deck called “Multicolors”, hard to find except through online sources. Mike Caro's deck and the Multicolors both use the black spade pips, red heart pips, green clubs, and blue diamond pips. The World Poker Tour also shows the players' cards in four colors (with black spades, red hearts, blue diamonds and green clubs) for easy viewing on small television screens.

In the German game of Skat the official tournament standard since the 1990s is to use a four-color deck known as a Turnierbild deck. In these decks, spades are green and diamonds are yellow, the clubs and hearts being respectively black and red as normal, which also reflects the suit order: clubs, spades, hearts, diamonds. This is intended as a compromise for players (typically from former East Germany) who prefer German suits over French; the green spades translate to leaves and the yellow diamonds to bells in the German suits.