Botifarra (Catalan pronunciation: ) is a point trick-taking card game for four players in fixed partnerships played in Catalonia, the Northeast country of Spain, and parts of Aragon and Castelló province. It is a historical game also played in many parts of Spain, not only in bars and coffee shops. The game is closely related to Manille from which it takes the mechanics, but its rules enforces deduction and minimises the effects of luck.

Botifarra is a point trick card game and only the points in the tricks are important, not the number of tricks, although a trick also has a value by itself. The game is usually played for 101 points or more, and this requires several hands.

The point value of each card is as follows:

One additional point is added for every trick won 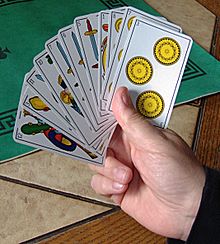 Botifarra cards in the hand

Botifarra is played with a Spanish 48-card deck of Coins, Cups, Swords and Batons running from 1 to 12. The card order is 9 (high), Ace, King, Horse, Jack, 8, 7, 6, 5, 4, 3, 2 (low). The dealer deals the whole deck counterclockwise in batches of four cards. After each hand the turn to deal and play always passes to the right. Usually, dealer's right hand opponent shuffles the deck and the left hand opponent cuts.

Trumps is selected by choosing the suit the dealer wants, or he may then select Botifarra (NT), or he passes the previlige to his partner. If the dealer passes, the partner must choose a suit or No trumps, for he cannot pass the right to choose.

In case the game played is Botifarra, the score may be doubled, and Contrar, Recontrar and Sant Vicens can double it further, so that there could be up to 4 doubles in the game. So, the order in which the players have the opportunity to double is:

The player to the right of the dealer leads first, known as "palo de salida". Any card may be played, but suit must be followed if possible, otherwise, trump must be played, and the winner of each trick then leads to the next. The tricks are stored face down in front of one of the members of each team, and they can not be consulted, except for the last trick played. Each trick is won by the highest card played, the highest trump played, or if a no-trump contract is played, by the highest card of the suit led.

In some versions of the game, the cards are never shuffled at the start of each hand. The two piles of cards from the previous hand are simply placed on top of each other and the deck is cut by the next player in order of play. This means that the cards will be distributed in such a way that the probability of acquiring a singular hand will not be far from happening.

A revoke is penalised by the loss of all the points won so far during the play. The opponents score 36 points in the case of a normal hand and 72 in the case the current play is botifarra (NT).

A misdeal leads to the start of a new hand, but this will not be penalised with any point. The player to the right of the person who misdealt the cards will then deal and select trumps, thus making the initial dealer lose out on the option of selecting trumps himself.

When playing Botifarra you must also bear in mind that it is forbidden to speak, show you cards and make signs and comments that may indicate your cards or the good or bad decision of a hand. Despite this, it is quite normal to make some comments during the game, which adds to a more entertaining atmosphere.