Baseball (or in some early editions, "Batter-Up Baseball") is a card game simulating the sport of baseball, played with special cards and a diagram of a baseball diamond. The game was created by Ed-u-Cards Manufacturing Corporation, New York.

The deck consists of 36 cards representing a variety of base hits, (mostly singles, but only one home run), balks, stolen bases, a hit-by-pitcher, balls, strikes, and a variety of outs. 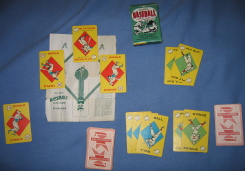 Two outs, a full count, one RBI, and the bases are loaded: a standard deck (circa 1957) with the original diamond diagram. 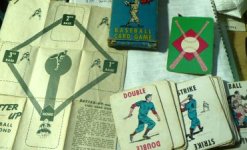 In some editions from the 1960s, strikes and outs are color-coded orange, balls green, and all cards that advance a runner, blue, while in late-1950s editions, strikes and outs are green, balls blue, and cards advancing a runner, red. The cards are illustrated with line drawings of the action represented by the card; in the 1960s, a New York Mets edition included Mr. Met as the principal figure in the illustrations, and a Mets logo as the back design.

The game is playable by any arbitrary number of players (the box stating that it "can be played by 1 to 9 players"). The cards are not dealt; instead, whichever player is "at bat" turns over cards from a freshly shuffled deck until put out three times, following the actions named on the cards:

An inning consists of each player getting a turn "at bat" for three outs; a game consists of nine innings. Scoring is as in an actual baseball game.

This game had a limited print run, but decks of varying vintage can be found online. Or one could improvise a deck from the same "VisEd" cards traditionally used in the game of 1000 Blank White Cards.