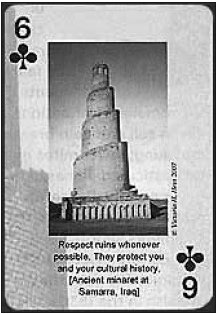 Sample of the cards.

The archaeology awareness playing cards are a set of playing cards developed by the United States Department of Defense designed to educate members of the United States military serving in Iraq and Afghanistan about the importance of respecting ancient monuments, to try to preserve the Iraqi and Afghan national cultural heritage. The goal of the publication of the cards was two-fold according to Fort Drum archaeologist Laurie Rush - to prevent unnecessary damage to ancient sites and to stem the illegal trade of artifacts in Iraq. The military has long recognized that educational playing cards are a good way to capitalize on the time soldiers spend waiting for orders.

They were devised following the success of the most-wanted Iraqi playing cards (officially called "personality identification playing cards") that were used in the 2003 invasion of Iraq to help members of the U.S. military identify wanted personnel from the Baathist regime. Approximately 40,000 sets of the cards were issued to U.S. forces. In the archaeology deck, each suit has a theme: diamonds for artifacts, spades for digs, hearts for "winning hearts and minds," and clubs for heritage preservation.

The set also contained other cards such as the jokers that provided additional information about heritage preservation.

On November 7, 2007, the DoD program, entitled “In-Theater Heritage Training for Deploying Personnel”, was awarded the "Chairman's Award" from the Advisory Council on Historic Preservation, an independent federal agency that promotes the preservation, enhancement, and productive use of the United States of America's historic resources, and advises the President and Congress on national historic preservation policy.