Tute is a card game for two or four players, originating in Italy, and one of the most popular card games in Spain. The game is played with a deck of traditional Spanish playing cards or naipes that are very similar to the Italian 40-card deck. Most of Tute variants have very similar rules to normal tute. This variations are different by the number of deck cards used or variations in the standard rules. 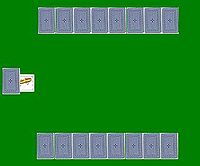 At the start of the hand both players receive eight cards, the trump is placed in the same way as normal Tute.

This Havanian of Tute is a two player variant. After the deal, each player receives eight cards. The trump is placed the same way as in two-player normal tute.

Like in normal tute after each play, the winning player after placing in the baza the two cards, will take from the deck a card and the loser the next one. The worth of cards is the same. The players can't chant tute and the rest of Canticles can be made any moment of the hand (except when only two cards left in the deck). If the player has a seven of the trump suit, and the card is bigger, this card can be exchanged with the seven. The player that earn 100+ wins the game. Players can chant capote when the same player gets the last eight tricks of the hand, when a player chants capote the points earned by both doesn't count and the rest of the game depends of the player to get the 8 tricks if the player doesn't reach the 8 tricks the opponent wins the game.

The Draged Tute is a three player variant, each one receives 13 cards. The last card, after the deal is done is turned face up, as in normal tute, turning in to the trump suit. The Game rules of Normal Tute stand, including the canticles.

The Tute Cabrero or Tute Cabrón is a variant for three to four players; each one receives ten cards. There is no trump until a situation of the game. The Tute Cabrebrero is very similar to the Tute in Pairs the difference between the two is that there is not a single winner in every deal, there is only one loser, this is the player with an intermediate position in the hand.

Martinez Tute Cabron is an improvement to the tute cabron. In this variant have been introduced some modifications coming from the bridge game and from Calahorra Tute Cabron. This variant is played in Bahrain and other Arab countries.

The Martinez Tute cabron has these particularities:

The Auctioned Tute is played by 3 players or 4 in a special variant, using 36 cards of the deck (all the kings are retired from the deck before starting). At the start of each round all cads are delivered to the three players, no trump is established at the deal time as in other kinds of tute.

In each round of the game one of the players competes against the other two, beating the number of points he thinks he can win with his cards (auction). At the time the auction ends, the player chooses the trump suit and tries winning as minimum the mount he estimated. At the end of the round the points of the beating player are counted, if it reaches the estimate number or wins more point, he wins the round. If he fails, the other players win even if their score is lower. During the game the canticles are the same (not including Tute), the only difference is that only the player that beats is the only one that can do it. The beating player also can claim the ten points if he winds last cards showdown.

The game is very similar to three player one, but each round one of the players stands out of the game. After the deal and auction, turns into the game moderator, taking and watching the cards of the player who has won the auction, and optionally increasing the amount of the bet in ten points. The auction stands the in the same way as normal auctioned tute rules. When the moderator passes, the cards are returned to the player who won the bet.If the moderator increases the beat, the cards remain in his hands, and the other player gets out the deal. The next rounds follow the same rules.

The game is played with 36 cards of Spanish deck, all the cards are deal to the three players. No trumps are established at the begin. The Rules of Normal tute stand, the main objective of the game is to win most points, or less points. The player that stands in the middle losses the round. The game continues until a player has lost six times, being the overall loser. After a player makes the first canticle, he obtains 40 points and the cards of the suit of that King and Knight turn in the trump.

The game is played with 40 cards of Spanish deck, all the cards are deal to players, last card dealt is the trump. Rules of normal tute stand during the play. The objective is to win less points as possible, the player with most points lose unless he has 101 or more points. If there is a tie in points and one of the tied players wins the last trick losses the round. If no one of the tied players took the last trick, the player that is sitting to the right of the one who took the last trick losses.

In Morocco, the game is known as Tuti. The vocabulary of the game is of Spanish origins (shbada for espada, cobas for copas etc..). It is played in pairs, with the same scoring system as in Spain.

The game is played by 2 players. Eight cards are dealt to each one. Rules of normal tute stand, tute canticle is not valid. The first player that earns 121 or more points wins the game.