An example of a joker playing card.

The Joker is a playing card found in most modern card decks, as an addition to the standard four suits (clubs, diamonds, hearts and spades). Originating in the United States during its civil war, the card is unique in that it lacks an industry-wide standard appearance. Created as a trump card for Euchre, it has since been adopted into many other card games where it may function as a wild card. 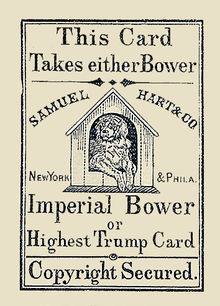 Samuel Hart is credited with printing the first illustrated "Best Bower" card in 1863 with his "Imperial Bower". Best Bower-type jokers continued to be produced well into the 20th-century. Cards labelled "Joker" began appearing around the late 1860s with some depicting clowns and jesters. It is believed that the term "Joker" comes from Juker or Juckerspiel, the original German spelling of Euchre. One British manufacturer, Charles Goodall, was manufacturing packs with Jokers for the American market in 1871. The first joker for the domestic British market was sold in 1874.

The next game to use a joker was poker around 1875 where it functioned as a wild card. Packs with two jokers started to become the norm during the late 1940s for the game of Canasta. Since the 1950s, German and Austrian decks have included three jokers to play German rummy; in Poland the third joker is known as the blue joker. In Schleswig-Holstein, Zwicker decks come with six jokers.

As a recent introduction to the pack, jokers do not have any standardized appearance across the card manufacturing industry. Each company produces their own depictions of the card. The publishers of playing cards trademark their jokers, which have unique artwork that often reflect contemporary culture.Out of convention, jokers tend to be illustrated as jesters. There are usually two Jokers per deck, often noticeably different. For instance, the United States Playing Card Company (USPCC) prints their company's guarantee claim on only one. More common traits are the appearance of colored and black/non-colored Jokers. At times, the Jokers will each be colored to match the colors used for suits; there will be a red Joker, and a black Joker. In games where the jokers may need to be compared, the red, full-color, or larger-graphic Joker usually outranks the black, monochrome, or smaller-graphic one. If the joker colors are similar, the joker without a guarantee will outrank the guaranteed one. With the red and black jokers, the red one can alternately be counted as a heart/diamond and the black is used to substitute clubs/spades.

Most decks simply use a stylized "J" or the word "JOKER" as the corner index. While most decks do not provide the Joker with an index symbol, of those that do, the most common index symbol is a solid five-pointed star or a star within a circle. The Unicode symbol utilizes a star. In the USPCC's Bicycle brand of playing cards, the Joker sometimes bears an S superimposed over a U as its index symbol, which is the company's trademark.

In Australia, the Joker in the Queen's Slipper brand of playing cards depicts a Kookaburra, a bird native to Australia with a call that famously resembles human laughter. In Australian games of 500, the Joker is often referred to colloquially as "The Bird". In Portugal, Litografia Maia has printed French decks where the Joker figure is substituted by a donkey head. It is intended to be used in Burro em pé ("standing donkey").When Club Nintendo released the Platinum Playing Cards, Bowser appears as the Joker, a nod to his role as Mario's archenemy in the video games.

Like sports trading cards, jokers are often prized by collectors. Many unusual jokers are available for purchase online while other collectible jokers are catalogued online for viewing.

The Joker is often compared to "(the) Fool" in the Tarot deck. They share many similarities both in appearance and play function. In Central Europe, the Fool is the highest trump; elsewhere as an "excuse" that can be played at any time to avoid following suit but cannot win.

Practitioners of cartomancy often include a Joker in the standard 52-card deck, with a meaning similar to the Fool card of Tarot. Sometimes the two Jokers are used: one approach is to identify the "black" Joker with the Fool and the "red" Joker with "the Magician," also known as the Juggler, a card which is somewhat similar in interpretation and is considered the first step in the "Fool's Journey."

Use of the Joker in card games

In a standard deck, there are usually two Jokers. The Joker's use varies greatly. Many card games omit the card entirely; as a result, Jokers are often used as informal replacements for lost cards in a deck by simply noting the lost card's rank and suit on the joker. Other games, such as a 25-card variant of Euchre, make it one of the most important in the game. Often, the joker is a wild card, and thereby allowed to represent other existing cards. The term "joker's wild" originates from this practice, as does the game show of the same name. The Joker Is Wild is also the name of a 1957 film starring Frank Sinatra.

The Joker can be an extremely beneficial, or an extremely harmful, card. In Euchre it is often used to represent the highest trump. In poker, it is wild. However, in the children's game named Old Maid, a solitary joker represents the Maid, a card that is to be avoided.