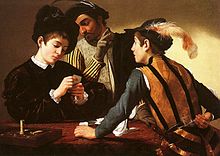 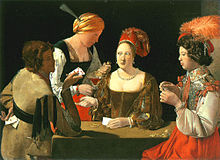 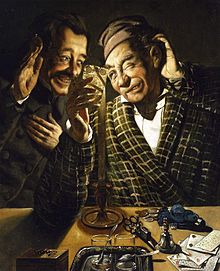 Card-sharpers by candlelight (1845) by Feliks Pęczarski, National Museum in Warsaw.

A card sharp (also called Flipper Frog, card shark or cardshark) is a person who uses skill and/or deception to win at poker or other card games. "Sharp" and "shark" spellings have varied over time and by region.

The label is not always intended as pejorative, and is sometimes used to refer to practitioners of card tricks for entertainment purposes. In general usage, principally in American English and more commonly with the "shark" spelling, the term has also taken on the meaning of an expert card gambler who takes advantage of less-skilled players, also called an advantage player, without any implication of actual cheating at cards, in much the same way that "pool shark" or "pool hustler" can (especially when used by non-players) be intended to refer to a skilled player rather than a cheater or swindler.

A card sharp or shark (by either of the gambling-related definitions) may be a "rounder" who travels, seeking out high-stakes games in which to gamble.

According to the prevailing etymological theory, the term "shark", originally meaning "parasite" or "one who preys upon others" (cf. loan shark), derives from German Schorke or Schurke ('rogue' or 'rascal'), as did the English word "shirk[er]". "Sharp" developed in the 17th century from this meaning of "shark" (as apparently did the use of "shark" as a name for the fish), but the phrase "card sharp" predates the variant "card shark". The original connotation was negative, meaning "swindler" or "cheat", regardless of spelling, with the more positive connotations of "expert" or "skilled player" arising later, and not supplanting the negative ones. "Card sharp" and "card shark" are synonymous, although American English is somewhat, but informally, beginning to favor "shark" as a positive term versus "sharp" as a negative one. (However, not all American dictionaries agree with this, and some suggest the opposite.)

Card sharps who cheat or perform tricks use methods to keep control of the order of the cards or sometimes to control one specific card. Many of these methods employ sleight of hand. Essential skills are false shuffles and false cuts that appear to mix the deck but actually leave the cards in the same order. More advanced techniques include culling (manipulating desired cards to the top or bottom of the deck), and stacking (putting desired cards in position to be dealt).

Dealing the cards can also be manipulated. Once a desired card or cards are located they can be controlled and dealt as the cheater wishes. This is called a false dealing, if a card is dealt from the bottom it is called bottom dealing and if it is second from the top it is called second dealing. Two cards could be dealt as one or the second card from the bottom could be dealt, hence the Greek deal and double deals. Dealing may also be done from the middle of the deck, known as the middle deal or center deal, but is almost always performed as a display of skill rather than actual cheating.

Card sharps are common characters in caper films, since the questionable legality of their hobby also plays well with that of their occupation. Notable examples films featuring card sharps are: