It is possible to find sets of dice with the even stronger property that, for each die in the set, there is another die that rolls a higher number than it more than half the time. Using such a set of dice, one can invent games which are biased in ways that people unused to nontransitive dice might not expect (see Example).

An example of nontransitive dice (opposite sides have the same value as those shown).

Consider the following set of dice.

Now, consider the following game, which is played with a set of dice.

Though the three nontransitive dice A, B, C (first set of dice)

and the three nontransitive dice A', B', C' (second set of dice)

Efron's dice are a set of four nontransitive dice invented by Bradley Efron.

The four dice A, B, C, D have the following numbers on their six faces:

Each die is beaten by the previous die in the list, with a probability of 2/3: 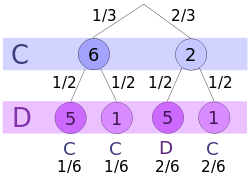 A conditional probability tree can be used to discern the probability with which C rolls higher than D.

B's value is constant; A beats it on 2/3 rolls because four of its six faces are higher.

Similarly, B beats C with a 2/3 probability because only two of C's faces are higher.

P(C>D) can be calculated by summing conditional probabilities for two events:

The total probability of win for C is therefore

With a similar calculation, the probability of D winning over A is

The four dice have unequal probabilities of beating a die chosen at random from the remaining three:

As proven above, die A beats B two-thirds of the time but beats D only one-third of the time. The probability of die A beating C is 4/9 (A must roll 4 and C must roll 2). So the likelihood of A beating any other randomly selected die is:

Similarly, die B beats C two-thirds of the time but beats A only one-third of the time. The probability of die B beating D is 1/2 (only when D rolls 1). So the likelihood of B beating any other randomly selected die is:

Die C beats D two-thirds of the time but beats B only one-third of the time. The probability of die C beating A is 5/9. So the likelihood of C beating any other randomly selected die is:

Finally, die D beats A two-thirds of the time but beats C only one-third of the time. The probability of die D beating B is 1/2 (only when D rolls 5). So the likelihood of D beating any other randomly selected die is:

Note that Efron's dice have different average rolls: the average roll of A is 8/3, while B and D each average 9/3, and C averages 10/3. The nontransitive property depends on which faces are larger or smaller, but does not depend on the absolute magnitude of the faces. Hence one can find variants of Efron's dice where the odds of winning are unchanged, but all the dice have the same average roll. For example,

These variant dice are useful, e.g., to introduce students to different ways of comparing random variables (and how only comparing averages may overlook essential details).

A set of four dice using all of the numbers 1 through 24 can be made to be nontransitive. With adjacent pairs, one die will win approximately 2 out of 3 times.

For rolling high number, B beats A, C beats B, D beats C, A beats D.

These dice are basically the same as Efron's dice, as each number of a series of successive numbers on a single die can all be replaced by the lowest number of the series and afterwards renumbering them.

Miwin's Dice were invented in 1975 by the physicist Michael Winkelmann.

Consider a set of three dice, III, IV and V such that

The following nontransitive dice have only a few differences compared to 1 through 6 standard dice:

Warren Buffett is known to be a fan of nontransitive dice. In the book Fortune's Formula: The Untold Story of the Scientific Betting System that Beat the Casinos and Wall Street, a discussion between him and Edward Thorp is described. Buffett and Thorp discussed their shared interest in nontransitive dice. "These are a mathematical curiosity, a type of 'trick' dice that confound most people's ideas about probability."

Buffett once attempted to win a game of dice with Bill Gates using nontransitive dice. "Buffett suggested that each of them choose one of the dice, then discard the other two. They would bet on who would roll the highest number most often. Buffett offered to let Gates pick his die first. This suggestion instantly aroused Gates's curiosity. He asked to examine the dice, after which he demanded that Buffett choose first."

In 2010, Wall Street Journal magazine quoted Sharon Osberg, Buffett's bridge partner, saying that when she first visited his office 20 years earlier, he tricked her into playing a game with nontransitive dice that could not be won and "thought it was hilarious".

A number of people have introduced variations of nontransitive dice where one can compete against more than one opponent.

Oskar van Deventer introduced a set of seven dice (all faces with probability 1/6) as follows:

One can verify that A beats B,C,E; B beats C,D,F; C beats D,E,G; D beats A,E,F; E beats B,F,G; F beats A,C,G; G beats A,B,D. Consequently, for arbitrarily chosen two dice there is a third one that beats both of them. Namely,

Whatever the two opponents choose, the third player will find one of the remaining dice that beats both opponents' dice.

One can verify that, when the game is played with one set of Grime dice:

However, when the game is played with two such sets, then the first chain remains the same but the second chain is reversed (i.e. A beats D beats B beats E beats C beats A). Consequently, whatever dice the two opponents choose, the third player can always find one of the remaining dice that beats them both (as long as the player is then allowed to choose between a one-die option and a two-die option):

There are two major issues with this set, however. The first one is that in a two-die option of the game, the first chain should stay exactly the same in order to make the game nontransitive. In practice, though, D actually beats C. The second problem is that the third player would have to be allowed to choose between a one-die option and a two-die option - which may be seen as unfair to other players.

A four-player set has not yet been discovered, but it was proven that such a set would require at least 19 dice.

Tetrahedrons can be used as dice with four possible results.

How to see it? The following tables show all possible outcomes.

The miwin’s dodecahedra (set 1) win cyclically against each other in a ratio of 35:34.

The miwin’s dodecahedra (set 2) win cyclically against each other in a ratio of 71:67.

It is also possible to construct sets of nontransitive dodecahedra such that there are no repeated numbers and all numbers are primes. Miwin’s nontransitive prime-numbers-dodecahedra win cyclically against each other in a ratio of 35:34.