Wolf Chess is a chess variant invented by Dr. Arno von Wilpert in 1943. It is played on a 10x8 chessboard and employs several fairy pieces including wolf and fox - compound pieces popular in variants and known by different names.

Wolf Chess correspondence matches and tournaments have been held, one of which (Paris vs. Augsburg, September 1960) is claimed to be the first international over-the-board match for a chess variant (Pritchard 1994:343). 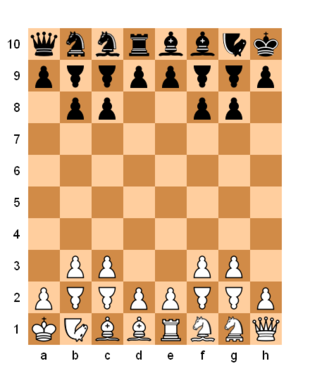 As in standard chess, White moves first and the winning objective is checkmate. The king, queen, rook, bishops, and pawns move and capture the same as they do in chess. In addition there are some special rules.