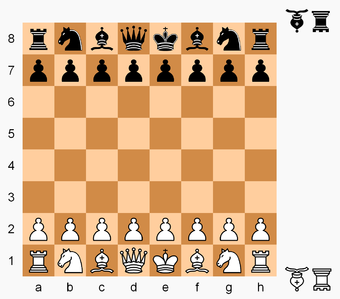 Falcon-Hunter Chess starting position. The falcon and the hunter, represented here by inverted pieces, are initially off the board.

Moves of the falcon and hunter

Neither piece can move along a rank. The pieces capture the same as they move.

All the rules and conventions of standard chess apply, including the starting setup. The falcon and hunter start the game off the board and out of play (see diagram). Once a player loses (or exchanges) his queen, a rook, a bishop, or a knight, he may, on any subsequent move, enter his falcon or hunter into play on any empty square of his home rank. Doing so constitutes a turn. The player becomes eligible to enter his remaining fairy piece (falcon or hunter) after losing a second piece (queen, rook, bishop, or knight). A move entering the falcon or hunter into play may also give check. 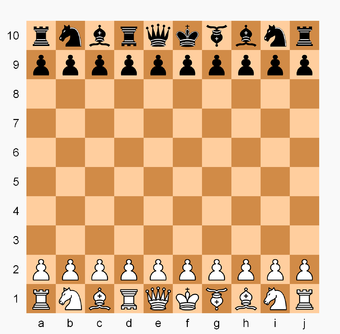 Decimal Falcon-Hunter Chess (also known as Great One-Way Chess), invented in the 1950s, is played on a 10x10 board with the falcon and hunter already in the starting setup (see diagram). All the standard chess rules and conventions apply, with the following differences: