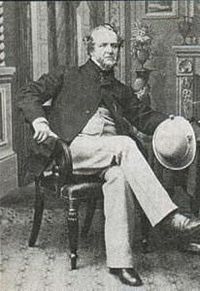 Staunton Memorial tournaments had previously been held in 1946 (Groningen, Mikhail Botvinnik won) and in 1951 (Cheltenham - Lemington Spa - Birmingham, Svetozar Gligorić won). The latter commemorated the one hundred years that had passed since the London 1851 chess tournament, a landmark event in Staunton's life.

The first edition of the modern series was played in 2003 at Simpson's-in-the-Strand, London, England to mark its 175th birthday; subsequent editions were also held there. Simpson's-in-the-Strand is a restaurant which Staunton regularly visited in the 19th century to play and discuss chess (it was then a coffee house known as "The Divan" or "Simpson's Divan"). In 1851, it was the venue of the famous "Immortal Game", played between Adolf Anderssen and Lionel Kieseritzky.

The first three editions of the tournament were played as a four-player double round-robin. The fourth and fifth edition saw an expansion to twelve participants, contesting a single round robin. The 2008 tournament was the strongest to be held in London since 1986.

Implementing a further change in 2009, the organizers split the event into two groups, the main attraction being a double round "Scheveningen" format and the other, a single round "all-play-all" won by Jan Timman of the Netherlands, ahead of Viktor Korchnoi, among others.

Funding for the tournament ceased in 2009 and so 2010's event comprised only a celebratory Dinner and pro-am exhibition game held to raise funds for Anatoly Karpov's FIDE Presidential campaign. Garry Kasparov and Nigel Short were just two of the guests who participated in the event.

Below is the list of winners of the Memorial tournament. The names of winners who have taken the trophy on tie-break are shown in bold typeface.

In its later editions, the tournament also doubled as a UK versus Netherlands match, although the UK team sometimes comprised a mix of home players and overseas guests. The Netherlands won the matches of 2006, 2007 and 2008, while The UK won the match held in 2009.