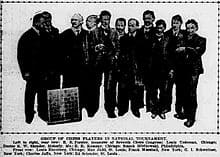 Mlotkowski as part of a group photo at the St. Louis tournament, 1904

He was born into a Polish family in America. His first name, Stasch (Polish Staś), is the diminutive form of the name Stanisław (Stanislau).