Khadilkar became National Women's Chess in 1976 at the age of 13 and was the first to win that championship in three consecutive years. She has held the title on five occasions:

Khadilkar became the first female to compete in the Indian Men's Championship when she participated in 1976. Her involvement in a male competition caused a furore that necessitated a successful appeal to the High Court and caused the World Chess Federation president, Max Euwe, to rule that women cannot be barred from national and international championships. She beat three state champions - Gaurang Mehta of Gujarat, Abdul Jabbar of Maharashtra and A. K. Ghosh of West Bengal - in the competition. 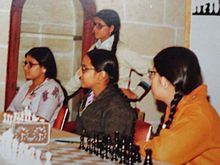 Khadilkar won the Zonal Championships twice, in Dubai and Malaysia, and became the World No.8 player. She was also the first Asian player to beat a chess computer, in London in 1989.

On one occasion, she played 113 opponents simultaneously, winning 111 of the games and drawing two.

Rohini has travelled abroad to represent India on 56 occasions, visiting numerous countries. On each occasion, she was sponsored by the Government of India as an Chess Ambassador. Her visits included trips to the then-Communist countries of Poland, USSR and Yugoslavia, which were encouraged by Indira Gandhi, the prime minister at that time.

In 1993, Rohini retired from chess and enrolled as a student at the Printing Technology Institute. She came first in her cohort, earning a Gold Medal, and was given Printing Diploma by Agfa-Gevaert.

Rohini became the first female editor of an evening newspaper in Maharashtra. She is the assistant editor of Navakal and has been editor of Sandhyakal since 16 December 1998.

In 1977, Rohini won the Chhatrapati Award for outstanding performance in chess. Subsequently, she has been awarded India's highest honour in sports, the Arjuna award. She has also been declared Maharashtra Kanya for her chess exploits.