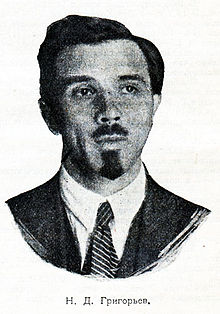 Nikalai (Nikolay) Dmitrievich Grigoriev (Russian: Никола́й Дми́триевич Григо́рьев) was a Russian chess player and a composer of endgame studies. He was born on 14 August 1895 in Moscow, and he died there in 1938.

His father, was a professional musician in the Bolshoi Theatre orchestra. At the relatively late age of eighteen, Grigoriev joined the Moscow chess club and played in the Moscow tournament of 1915. There, one of his opponents was the future world champion Alexander Alekhine against whom he lost but later maintained friendly relations.

In 1917, he was drafted into the Imperial Russian army in the First World War and was sent to the front. He was wounded and returned severely ill.

In early October 1937, Grigoriev returned from a trip to the Far East and Siberia, where he gave lectures and played. The NKVD militia on the train arrested him. Grigoriev was frail; he lost consciousness immediately after the use of force, and his throat began to constantly bleed. After an interrogation, the interrogators had to wash down the room. An unexpected illness then confined him to bed. Severe complications required immediate surgery. The patient was severely weakened and died of lung cancer.

In the First Soviet Chess Championship (Moscow 4-24 October 1920) Grigoriev took 5-7th place (8 wins, 6 losses, and only one draw), despite undertaking extensive and difficult organizational duties including finding scare food rations for the participants.

Before his departure from Russia in 1921, Alekhine played a match with Grigoriev of 7 games resulting in 2 wins and 5 draws in favour of Alekhine. Analyzing the match, Levenfish said: "In some of the games only exceptional ingenuity saved Alekhine from destruction."

Grigoriev competed in various internal Soviet tournaments. His tournament victories included: the Third Chess Championship of the Trade Unions 1928 and he divided the 1-2nd places with Peter Romanovsky in the international Workers' Congress in Leningrad.

Grigoriev became better known, however, as a chess organizer and educationalist, chess journalist and problemist.

Grigoriev composed more than 300 endgame studies. He is especially noted for his prolific output of pawn endgames with only kings and pawns on the board, where he had no equal. In 1935, the French magazine La Stratégie organized a tourney for endgame studies with two pawns against one, and Grigoriev ran away with ten of the twelve awards.

In Diagram 1, White wins as follows:

Now Black can choose which of his three pawns he wishes to promote to a queen, but he loses no matter what.

In Diagram 2, White wins a pawn race through a beautiful repetitive maneuver:

Threatens to queen on move 5 with check, after which the queen can stop Black's pawn if it advances to d2. Black's best defense is to try to chase the White pawn with his king.

The Black king cannot catch the h-pawn, so now Black must counterattack by advancing his d-pawn. Now if White plays 3.h5, Black will queen on d1 with check. So...

And the pattern repeats itself again: