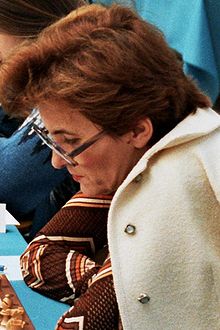 Milunka Lazarević (later Milunka Marković, born 1 December 1932 in Šantarovac, Yugoslavia) is a Serbian chess player and journalist. For many years, she was Yugoslavia's foremost woman player and became a contender for the Women's World Chess Championship. 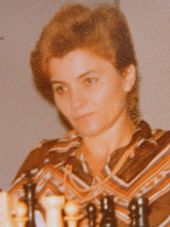 She was taught chess by her father at the age of fourteen and quickly became recognised as a talent in the game. Progressing to become Yugoslavia's leading woman player, she won the national championship eleven times between 1952 and 1982. It was during this period that she enjoyed a rivalry with compatriot Vera Nedeljkovic, the two regularly placing well in both domestic and international competition. Her playing style developed to be both exciting and imaginative, although there were occasions when this caused her to overplay the position, particularly against weaker players. According to Anne Sunnucks, this often robbed her of first prize.

Among her most notable early results were those from four zonal tournaments; she finished joint third at Herceg Novi 1954, joint second at Venice 1957, joint first at Vrnjacka Banja 1960 and third at Bad Neuenahr 1963. Her best result was to tie for first place at the World Championship Candidates Tournament in Sukhumi 1964. Unsuccessful in the play-off with Alla Kushnir and Tatiana Zatulovskaya, she missed the chance to challenge Nona Gaprindashvili for the Women's World Championship in 1965.

Later achievements included a share of second place at the Ohrid Interzonal 1971 (after Nana Alexandria). There were also outright or shared first places at Wijk aan Zee, Belgrade, Emmen (all 1972) and the Travnik zonal tournament of 1978. In team chess, she competed on board one for Yugoslavia at several Women's Olympiads between 1963-84, winning a silver team medal at Split in 1963.

Described by Sunnucks as an attractive redhead, Lazarevic spent many years working as a journalist and penned articles on Garry Kasparov and Boris Spassky for the magazine New In Chess. While her most active playing days subsided in the 1980s, she has not retired from the game altogether, participating at tournaments on a number of occasions in 2006 and 2008.