Marta Bartel (born Zambrów 20 May 1988), née Przeździecka, is a Polish chess player, who was awarded the title of Woman Grandmaster in 2009. 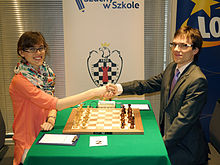 With husband Mateusz Bartel in Warszawa 2014