Mark Tseitlin got acquainted with chess in Leningrad's Pioneers Palace. He is self-taught, having studied without a coach. His peak FIDE rating was 2545 in 1995.

He was awarded the title of International Master in 1978, and became a Grandmaster in 1997.

Tseitlin immigrated to Israel in 1990, and is currently a trainer at the Beer-Sheva Eliahu Levant Chess club, a world-renowned club frequented by many of Israel's finest players.

Tseitlin has a daughter Ira and two granddaughters, who are living in Germany.

During his playing career he defeated Viktor Korchnoi four times and beat many famous grandmasters. His best tournament achievements include first place at Polanica Zdroj 1978 (ahead of Andersson), and second at Trnava 1979 (after Plachetka). Tseitlin is the many-time Beer-Sheva Chess Club Champion. 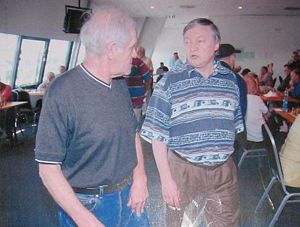 He is known for his sharp tactical vision at the chessboard, and is an acknowledged expert in many chess openings, such as the Grunfeld Defence.

Despite this remarkable success, Israeli Chess Federation failed to provide financial basis for Tseitlin to participate in World Senior Championships, preferring to sponsor other lower-rated chess players, both in 2004, in 2005 and in 2008 as well. ()

Black cannot castle because of 18.Qg4

In time trouble Karasiev fails to find best defence 28.... Re8