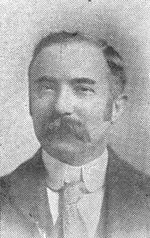 Van Vliet was the son of Annaatje Philip van Cleef of Amsterdam and Moses van Vliet, a tailor and merchant originally from Rotterdam. His father died in November 1865 and his mother in June 1868, and as a 13-year-old orphan he moved to England to live with his uncle Edward van Vliet. Another uncle, Eliazer Lion "Leon" van Vliet, was a pawnbroker in San Francisco and Louis moved there in 1884 at the age of 29. He apparently only learned chess from Leon and started playing tournaments. In 1887, when he was considered the "best player of the Pacific Coast", he moved back to London. In 1889 he came to Amsterdam to play his first international tournament, but he remained living in London for the rest of his life.

His most notable win was a 24-move victory over Emanuel Lasker at Amsterdam 1889. Within less than a year, Lasker would be ranked No. 1 in the world for the next twelve years, according to the website Chessmetrics.com. Van Vliet's best known loss came against Aron Nimzowitsch at Ostend 1907. Nimzowitsch annotated it for his work The Blockade and - with revised annotations - his work Chess Praxis, where Nimzowitsch pointed out a positional queen sacrifice that van Vliet could have played that Nimzowitsch believed would have allowed van Vliet to hold a draw. But even this would not have saved van Vliet, as indicated by modern chess engines.